Turn Me On Goddammit 2011 with English Subtitles

In Skoddeheimen, Norway, 15-year-old Alma is consumed by her hormones and fantasies that range from sweetly romantic images of Artur, the boyfriend she yearns for, to daydreams about practically everybody she lays eyes on.

Alma is a fifteen year old girl living in Skoddeheimen, a fictional town in Norway, with her single mom and her best friend close by her side. Alma’s biggest battle in her life is different from the battles we see in most young females’ lives, especially in film, and it’s with her raging hormones. She is beginning to become sexually awakened, and it becomes so consuming and so smothering that she can barely concentrate on anything else besides feeding her sexual desires.

And they are explicit. Writer/director Jannicke Systad Jacobsen doesn’t turn Turn Me On, Dammit! into a shallow exploration of self-pleasure nor does she make it become so comedic that we laugh at the lead character, Alma (played perfectly by Helene Bergsholm) but more often wince and regard her story as depressing or possibly relatable. Her acts are not small, shoplifting pornographic magazines from the grocery store where she works and charging up a hefty bill from several phone sex lines. The opening scene even shows her in the middle of a masturbating act with the phone lying next to her.

The more definitive conflict in the film is the fact that Alma has mistaken an accidental gesture from her crush Artur (Matias Myren) as a sexually flirtatious act, bringing her embarrassment throughout her school. At home, her mother, played wonderfully by Henriette Steenstrup, becomes aware of the steps she takes to pleasure herself, but unable to process the ideas and the resources to help her combat this problem. It becomes so bad that Alma has begun to fantasize not only about being with her crush, but fantasizing about engaging in sex acts with other friends and even her boss. Again, these fantasies are not meant to provide the audience with comedy but poignant realism in the sexual awakening of young teenagers and how sometimes their thoughts are uncontrollable. At times we see the look in young Alma’s eyes when she awakens from one of these fantasies and see she is not aroused by sometimes shocked and ashamed.

It was wise for Jacobsen to set her sights on a female lead. I’ve wearied of watching males in American films make choices for their own gain based on lust, greed, and hormones – also solely for comedic purposes. To see Turn Me On, Dammit! focus on the bitter side hormones play in the lives of teenagers in a raw form is intelligent and courageous. Had this been an American film, its subject matter most likely reduced to vast oversimplifications of the topic, the characters undeveloped and shortchanged, the depictions of steps for sexual gratification tasteless and filmed with smug undertones, and the aftertaste unremarkable and void of any truly impacting substance.

The film begins immediately, the plot and conflict turn up instantaneously, the characters quickly introduced and developed, and the film clocks in with seventy-one minutes well spent, not wasting a second in its goals to try and humanize the hormonal confusion and uncontrollable sexual tendencies of a young girl’s pubescent beginnings. Turn Me On, Dammit! is something of a miracle. American cinema should begin, if not, continue to take notes from foreign cinema. 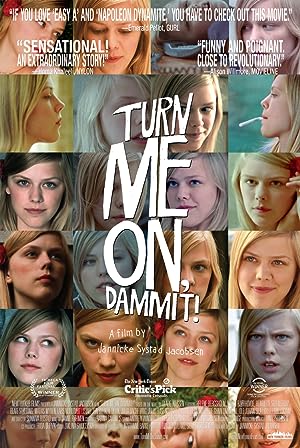 1 review for Turn Me On Goddammit 2011 with English Subtitles