Two brothers team up to battle a creature under the bed, in what is being described as a “suburban nightmare” tale.

UNDER THE BED is nothing more than an unwelcome attempt to update that classic child-in-danger horror sub-genre of the 1980s. Back then, a wave of good and not-so-good movies along the lines of THE GATE and MONSTER IN THE CLOSET depicted kids battling against the worst nightmares of childhood, fighting off supernatural beings and their disbelieving parents at the same time.

UNDER THE BED is such a film that tells a very similar storyline, but unfortunately the execution is lacking. This is a surprise given the director is Steven C. Miller, who also brought us the excellent home invasion horror flick THE AGGRESSION SCALE. For some reason, he decided to tint UNDER THE BED a deep shade of blue, so everything that happens is blue-tinged. It’s a depressingly predictable look and one which saps vitality from the production.

Not that there’s much there to begin with. This film is saddled with a dull backstory, some boring main characters (the angsty teenage character is a walking cliché) and way too much small talk to be much good. Sure, there are a handful of fun moments involving rubber-suited monstrosities, but the tension just isn’t there and such moments fall flat. What a pity. 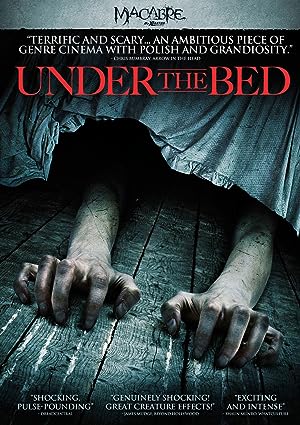 Under the Bed (2012)
87 min|Drama, Horror|03 Jul 2013
4.6Rating: 4.6 / 10 from 2,462 users
Two brothers team up to battle a creature under the bed, in what is being described as a "suburban nightmare" tale.
Director: Steven C. Miller
Creator: Eric Stolze
Actors: Jonny Weston, Gattlin Griffith, Peter Holden, Musetta Vander