A coming of age story about two great friends during the school years whose friendship is truly tested when one of the boys start to develop different feelings for the other. At first, it seems Philippe and Claude are just experimenting new sensations, everything is pure curiosity to them. But total reciprocity isn’t the name of the game and Philippe is clearly infatuated with his friend.

Jacques Duron has written and filmed this brief ode to unrequited love between school boys (but no less worthy) living in a small central French town, Gannat, an ancient settlement tho’ the film eschews establishment of a broader context than the narrow paths the boys regularly traverse, shuttling between school via rail, without any hint as to what location– indeed of the school environment only what one must take as a school playground is shown– and Philippe’s home and a non-decrepit area of the town, nevertheless, showing evidence of its relative antiquity compared to structures from the epoch of the film, establishing thereby a contrast of youthful vitality existing in what must be considered drab surroundings doubtless exacerbated by the B&W film and autumnal season, but serving to emphasize the freshness of youth and the eternally recurring theme of sexual awaking and discovery, which Philippe, the older of the boys, and Claude the younger who initially sees Philippe as a roll model, proud to have his attention, eager to explore his stirrings with a more experience companion, while the older, perhaps confused by the strength of his passion and mindful of his supposed responsibilities only tentatively responds to the bold invitation for exploration, choosing to wait for slumber to worship at the altar of Kamadeva, supine before him, receiving encouragement , which proved ephemeral alas as Claude quickly progresses, matures, to a worship of Aphrodite leaving Philippe to his first experience of the despair of a jilted suitor, suffering all the pangs of rejection ,loss of his Ka one might conjecture, while finally willing to accept what Claude will grant him, at a price, in a surprising conclusion. 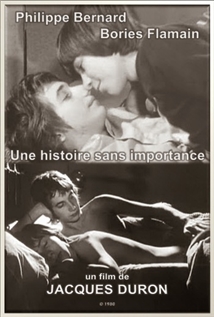 A History Without Importance (1980)
44 min|Drama, Short|12 Nov 2004
7.1Rating: 7.1 / 10 from 141 users
A coming of age story about two great friends during the school years whose friendship is truly tested when one of the boys start to develop different feelings for the other. At first, it …
Director: Jacques Duron
Creator: Jacques Duron
Actors: Philippe Bories, Bernard Flamain, Jeanne Barthélémy, Raymond Barthélémy