MARTY is a quirky straight guy weekdays, and gay on weekends, a high school senior, who along with his questionably straight friend JAKE, unravels the mystery of who put a hit on their friend THOMAS’S new gay lover. Jake uses his expertise as a peeping tom and gossip monger to discover neighborhood secrets, while Marty helps Thomas hide safely. At home Marty has problems of his own, when his boyfriend MICHAEL, and girlfriend ANYBODYS, find out about each other. When a surprise fourth person is sneaks into the room, the end results might be deadlier than the hit man.

What is the law about citizen’s arrest? Because the acting in this film (and I use the term loosely) is downright criminal. Especially from the men – and there are mostly men. While there may be some good things about UNSOLVED SUBURBIA, I couldn’t see past the poor performances to find any. It is like a good chef cooking with rancid food – no good can come of it. The boys involved are not only poor actors, they are a scrawny lot who get naked at the drop of a hat. There are few women who are equally dreadful but they don’t add up to much except jokes about lesbians and West Side Story. Avoid this film – it will not be a crime to miss it! 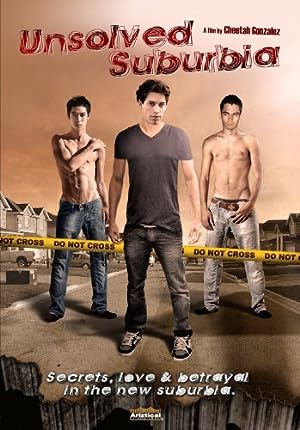