15-year-old Jesse is the only one who witnessed the stabbing of his friend Jonas. Now he has to face his family and friends form the BMX riders crew and explain the unexplainable – how he feels about it.

I saw the Belgian premiere of this film at the Film Fest Gent 2014, in a venue with 360 seats fully booked. I consider myself an experienced visitor of film festivals, and hence used to experimental and unusual creative products. But still, though something happens all the time, I was wondering all the time what this film was all about and whether it was going anywhere. While being a certified nerd who does not understand things like atmosphere, this film conveys nothing for me to digest or to take away. Yet I was not bored: I got the inclination to consult may watch not until after a full hour, merely to verify whether I wasn’t running late for the next movie on my schedule (we started a bit late while the projection failed in the beginning).

Notwithstanding a few positive remarks I’ve added to below paragraphs, I can say upfront that this seems (again) a typical case where the format takes over and the contents suffers. It certainly is deeply tragic what happens as aftermath following the stabbing of a friend, combined with a feeling of failure in at least attempting to prevent it, but the story scarcely touches the dramatics of the subject at hand. Only a few scenes zoom in on the event itself and its close protagonists. For example when the victim’s parents are a bit embarrassed not knowing what to do with the package of blood stained clothes they received from the police. A second example is when Jesse is declared a coward and deemed not welcome anymore in his peer group. Alas, such sparse moments with a useful dialog that enlighten how our main characters feel, pass by too quickly and should have deserved more attention. Intentionally remote scenes, visually and dramatically, make up most of the running time, leaving us on a figurative distance from the protagonists.

Maybe intended as a side issue, or just sheer luck to have them in this film, the gang of BMX riders is beautiful to watch in action. Even when just doing “a brief round” in the neighborhood, they are constantly trying tricks with their bikes. Just showing off, or constantly chasing perfection?? There are some extended field scenes where obstacles in nature are used to create spectacular jumps, watched by the camera from a safe distance. Dialog is mostly absent in these scenes, as could be expected. It did not bother me here, contrary to many other scenes where dialogs are dearly missed.

Some scenes may be construed as being a nice original find (no more, no less) to deviate from the standard ways of filming. The best example lies in the opening scenes, where one initially thinks that something is wrong with the projection. It takes a while before we find ourselves watching a set of surveillance monitors, overseeing a nearly empty shopping center. This drags on for some time, while nothing much seems to happen, other than the apparently bored security guard leaving his post for a leak or coffee. We don’t see the guard directly, only his reflection on the monitor screens. His departure clears up our indirect vision on the street, and transfers our focus to what happens there. Still not much, at first. Some adolescent boys seems to circle around each other, ending in a brief struggle and a sudden departure of two of them. Obviously, we observed a fatal encounter, as we suddenly enter the scene where we see one lying on the street, and his friend calling on him to respond. We are left on our own devices to infer what actually happened.

I added a lot of details in above paragraph, merely to illustrate my overall impression of this film. Many similar distantly observing scenes are exactly like this. So you know what to expect when deciding to go and see this movie. While applauded by professional critics, as well as the international youth jury 2014 of the Berlinale film festival, it does not connect with an average viewer like myself. It may serve its purpose in bringing novel ideas to colleague film makers, but it certainly misses its primary purpose to attract a layman’s audience. Also, it will fail to impress the typical art-house fan (if such a beast exists) by exaggerating its attempts to be different. I have absolutely no sympathy for works of art like these, as seeming to have an existence purely for the inner crowd. It could have been made much more digestible by cutting some of the scenes that drag on far too long, and adding some extra dialogs to bring us closer to the protagonists and what it is that does them tick. I might have myself considered warned beforehand, while observing that many reviews talk about the unusual film formats (nearly rectangular some of the time, wide screen at other times), the contrasting effects (sharp versus soft focus, loud versus soft sounds, distant versus close), and much more of such meta-talk.

All in all, I could not do anything else than giving the lowest score for the audience award when leaving the theater. But finally, I still want to conclude with a positive remark, about a for-once successful attempt to be different. The final credits don’t show the usual loooong list of contributors and participants, ranging from important to very unimportant, but this time we get an unordered list of names on the screen that does not change for some time. It suggests that every contribution to this film, be it large or small, was important for the final product. Very true, and it reminds us that not only the star roles can make or break a film, but also the 3rd assistant lighting boy has an effect. 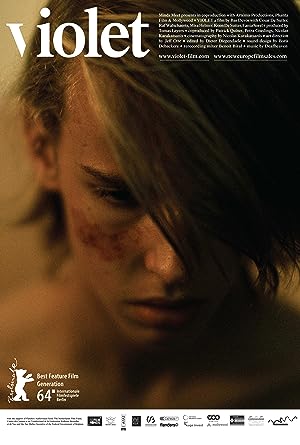 Violet (2014)
85 min|Action, Drama, Family|06 Nov 2014
5.8Rating: 5.8 / 10 from 351 users
15-year-old Jesse is the only one who witnessed the stabbing of his friend Jonas. Now he has to face his family and friends form the BMX riders crew and explain the unexplainable – how he feels about it.
Director: Bas Devos
Creator: Bas Devos
Actors: Cesar De Sutter, Koen De Sutter, Mira Helmer, Brent Minne