A story about two classmates – one smart and openly gay and the other school swimming star. They grow as friends and discover their attraction to each other. This story has been told many times but the characters in this version are very endearing.

Boy, am I glad I was able to see this movie.

The movie is about a young gay artist haunted by a tragedy during high-school. I won’t go very deep about the story, but basically he fell in love with another boy during high-school and it didn’t go very well. And believe me, not by the most common reasons. The story is really beautiful. Not having many characters, you get to know the 2 main characters very well and on the “crucial” moments it really gets into your heart. Except for Carter’s coach, this movie has fabulous, gorgeous, amazing acting. You see the expression of anger in Darrien’s face, when’s angry, the heart-felt tears, when he cries, and the sensitive smile when his with either his mother, his best-friend and of course, Carter.

Flaws: You never get to understand what are Darrien’s mother and carter’s father to each other. The movie is not very clear in terms of time. It seems as if only a few days have passed during the whole movie, but almost one year passed. (I think)

Personal Desire: I wish they could have developed a little more the relationship between Darrien and his mother. They could have made some touching scenes, since they were both great actors.

I’m glad it’s not underrated, but having only 17 votes…. I suppose… not many people have seen it? Well, those people don’t know what they’re missing. 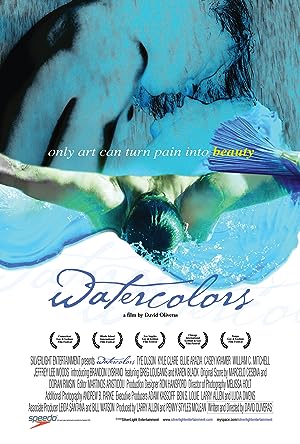 Watercolors (2008)
114 min|Drama, Romance|15 Nov 2009
6.0Rating: 6.0 / 10 from 1,374 users
A story about two classmates – one smart and openly gay and the other school swimming star. They grow as friends and discover their attraction to each other. This story has been told many …
Director: David Oliveras
Creator: David Oliveras
Actors: Tye Olson, Kyle Clare, Ellie Araiza, Casey Kramer