We Need a Vacation 2002 with English Subtitles

It is the end of the school year for the children of a dormitory town. Most of them leave the place for a vacation with their parents but not Lucien and Adama whose parents can’t afford the expense. While the big brothers of the housing estate are busy breaking the law Lulu and Adama manage to sneak into their neighbors’ trailer. The two stowaways are elated until they reach their destination: a nudist camp…!

‘Fais-moi des vacances’ (WE NEED A VACATION) is a finely wrought little film that studies the disparities between the classes in France while introducing us to a warmly tender and humorous friendship between two young lads. Directed and written by Didier Bivel (with writing assistance from Djamila Djabri) it offers a slice of life we rarely see – that underbelly of France’s projects where mixed races strive to exist without the amenities of those with means who surround their neighborhoods.

Lucien (Aymen Saïdi) lives with his father (Bernard Blancan), mother (Hiam Abbass), young sister Pamela (Laura Mas Navarro), and his tough streetwise older brother José (Nabil El Bouhairi) in a small flat. Close by is his African friend Adama (Ibrahim Koma) and his equally poor family of father (Makan Fofana), mother (Marie-Philomène Nga) and sister Fanta (Hawa Yakaré Sissoko). As school ends the kids whose families have money take them on a vacation, a state neither Lucien nor Adama can afford despite their obsession with that luxury. The two boys manipulate funds and ideas and ultimately come up with the idea of secretly jumping aboard a RUV of a family headed for the beach. BUT despite the success of their plan and the encouragement of the daughter of the van’s owners, the boys end up not at the beach but at a nudist camp, a fact that makes them flee! Upon returning home both boys’ families punish their activities and when Lucien seeks comfort from his older brother, José beats him and tells him to grow up. In the end the boys finagle their way to the beach, but of course by this time vacation time is over and they are on an empty beach re-evaluating their lives.

The cast is uniformly strong, the writing is excellent, and the camera work not only captures the claustrophobia of the projects but also opens up the vistas of the boys’ imaginations. It is a fine little film, one deserving of a wide audience. 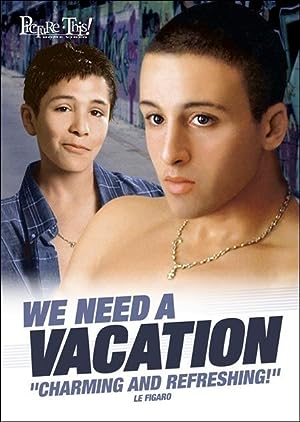 We Need a Vacation (2002)
86 min|Comedy, Drama|22 Jul 2004
6.1Rating: 6.1 / 10 from 121 users
It is the end of the school year for the children of a dormitory town. Most of them leave the place for a vacation with their parents but not Lucien and Adama whose parents can't afford the…
Director: Didier Bivel
Creator: Didier Bivel, Djamila Djabri, Philippe Lasry, Marc Syrigas
Actors: Thylda Barès, Siraboula Sissoko, Lilly-Fleur Pointeaux, Thomas Pitiot

2 reviews for We Need a Vacation 2002 with English Subtitles