On a Friday night after a drunken house party with his straight mates, Russell heads out to a gay club, alone and on the pull. Just before closing time he picks up Glen but what’s expected to be just a one-night stand becomes something else, something special. That weekend, in bars and in bedrooms, getting drunk and taking drugs, telling stories and having sex, the two men get to know each other. It is a brief encounter that will resonate throughout their lives. Weekend is both an honest and unapologetic love story between two guys and a film about the universal struggle for an authentic life in all its forms. It is about the search for identity and the importance of making a passionate commitment to your life.

I just watched WEEKEND at a screening at the Oslo LGBT film festival, and am still in shock. This is the most real cinematic version of guys falling in love in recent history. I’m a filmmaker myself, and was blown away by the caliber of the writing, directing, acting, cinematography, editing, and music of this fantastic film. There’s not a false note in the movie–everything rings true, even the ending (no spoilers here.) It’s the rare film, like WINTER’S BONE last year, that at every turning point takes what I call the elegant decision. WEEKEND is at a higher level than all other LGBT films playing the festival circuit this year (the only other film near this level is Tom Twyker’s 3.) Actually, it’s at a higher level than almost all films playing anywhere this year. Where did this film come from? Apparently the brilliant mind of Andrew Haigh (writer/director/editor), who, I noted on an IMDb search, started as an apprentice editor on GLADIATOR, and then assistant editor on BLACK HAWK DOWN (working with the master editor Pietro Scalia on both. Go UCLA!) I look forward to seeing more of Haigh’s work. Do not, I repeat, DO NOT miss this movie. 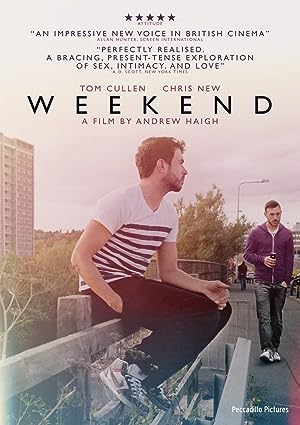 Weekend (2011)
97 min|Drama, Romance|04 Nov 2011
7.6Rating: 7.6 / 10 from 25,240 users
After a drunken house party with his straight mates, Russell heads out to a gay club. Just before closing time he picks up Glen but what's expected to be just a one-night stand becomes something else, something special.
Director: Andrew Haigh
Creator: Andrew Haigh
Actors: Tom Cullen, Chris New, Jonathan Race, Laura Freeman