Taha, a ten years old, is involved in a play in which children imitate their parents’ roles. Living with his divorced mother, Taha understands new things about his mom by playing her role.

A typical evening of a boy (Taha) described in 17 minutes short movie; lonely, bored, and there’s nothing much favor to eat. Sad story of lonely Taha described impressively, as he and his friends in neighborhood have a plan to play and imitate their parents. This is how the childhood of an innocent kid devastated, it doesn’t matter why his parents separated or why his mother become a prostitute; that’s it, we see how he realizes things about his mother. A mother who can’t even remember his own son does not like salty cucumber and still put it in his sandwiches; indicating that this mother doesn’t care much about her son and his upbringing. In the meantime we learn how that monster neighbor (fat man who can barely button his coat) abuses this single mother. This is why this short movie is “When the kid was a kid” because Taha feels being a “kid” only when he plays with his friends and imitates; afterward when he comes back home, he is the one whose childhood stolen and vanished. At the end he sees himself with black stains on his face which can hardly washed and probably leaves black stains in his heart forever. Quite a smart film. 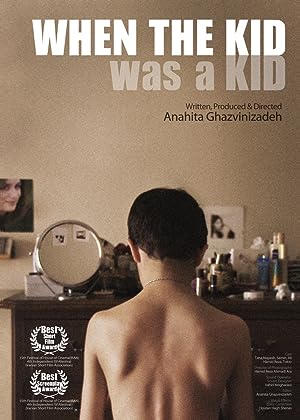