Alex tries to rebuild his relationship with his best friend Michael after revealing his feelings for him. When Michael reluctantly agrees to attend a GSA meeting, he reaches a new level of acceptance for Alex. Michael’s parents battle between accepting what they’re religion suggests, and opening their minds to accepting people for who they are.

Somehow I thought Connors father sounded really too laid back even if hes meant to be homophobic, he gave an expression like ‘I don’t care, what do I have to do anyway?’. The actor that played Jim should’ve been more aggressive to Connor. The only good thing about the character is that he dressed like a ‘regular dad’. As for Alex, he should’ve added more passion while being with Connor, I notice a lot of times when I saw him in the movie is that he was looking down quite a lot which really made me put off him which was disappointing. I thought the Mum and Connor himself. Sarah showed excellent expressions when confronting Jim. She was like Supermum if you ask me! Connor showed great passion for Alex and admitting it to him like a brave man to his father. I think this film is good but don’t keep your hopes up is all I’m saying. 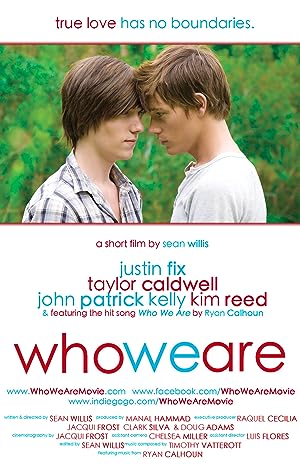 Who We Are (2010)
18 min|Short, Drama, Family|24 Apr 2010
4.9Rating: 4.9 / 10 from 314 users
Two best friends struggle to keep their friendship while dealing with the feelings they have for one another and the pressures of society.
Director: Sean Willis
Creator: Sean Willis (story), Sean Willis
Actors: Taylor Caldwell, Justin Fix, John Patrick Kelly, Kim Reed