Out on parole after 8 years inside, Bill Hayward returns home to find his now 11- and 15-year-old sons abandoned by their mother and fending for themselves. Unwilling to play Dad, an uncaring Bill is determined to move on. Although Dean the older boy has found a job and is doing his best to be a father to his younger brother Jimmy, the arrival of Bill brings them to the attention of social services. With the danger of being put into care looming, Dean forces his feckless dad to stay by threatening to grass him up for dealing. If there’s one thing Bill doesn’t want it’s to go back to prison. He reluctantly agrees to stay for a week to help fool social services that the boys are being cared for. Having never really grown up himself, Bill quickly connects with Jimmy and, through this new bond, starts to realize what he’s been missing. He has a family, a place in the world. He is a father. However, their happy family set-up is short lived when Jimmy gets into trouble with Bill’s dangerous old cohorts. To sort it out would breach the terms of his license and risk sending him back to jail. Bill’s next steps will show what sort of a dad he wants to be – a good one or a free one.

Watched this movie knowing nothing about it, and with the name wild bill, though it was one of those silly lets kill everyone movies, but i was absolutely engrossed by this movie from the first 5 mins, great storyline, and great acting, and being from this part of London myself, it catches the essence of life in the London ghetto life, and towards the end of the movie you really feel for the lead character and find yourself getting chocked up for the guy.

8 out of 10 from me, and i’m normally a hard critic of English films as there been so much rubbish in the last few years coming out of england.

I’m fully intent to watch this film again, and this time take my wife so she can see what i was raving about to her about this film. 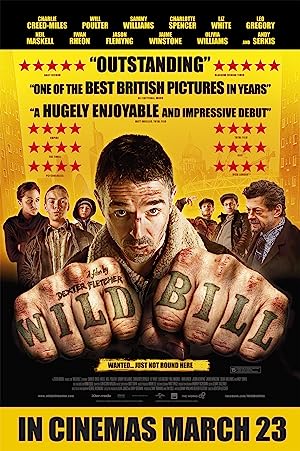 Be the first to review “Wild Bill 2011” Cancel reply