In a village in the Southwest of France, 1962. Maite and Francois are 18 years old. They are friends, not lovers. In Francois’s classroom, there are Serge, whose brother has just married to try to escape from the war in Algeria, and Henri, a pied-noir (Algerian-born Frenchman). Francois and Serge will have a homosexual relationship, but Serge wants to marry his brother’s wife…

On all fronts WILD REEDS is a top-notch drama – offering a look into the lives of 4 teenagers at a boarding school in rural France in the early 60s, this film is complex and immaculately well-made. Unusual in films depicting adolescence, WILD REEDS is complex and sophisticated, respectful of its’ characters’ varying sexualities (and their struggles to accept same), while also offering other glimpses of their intelligence and growing independence: views on the Algerian war, which was then raging, and on communism (with one character defined as communist, and another as an ardent anti-communist). The lush cinematography is summery and beautiful throughout, and the cast (most whom have gone on to other notable films) is great throughout.

Techine’s direction gives the many strands of this story a great, personal feel – the shoe store scene stands out as an honest depiction of an individual recognizing and trying to accept his sexuality, and attempting to identify other gay people, as a way of lessening isolation, and in an attempt at spontaneously finding some sort of role model. Very thoughtful and very well-made. 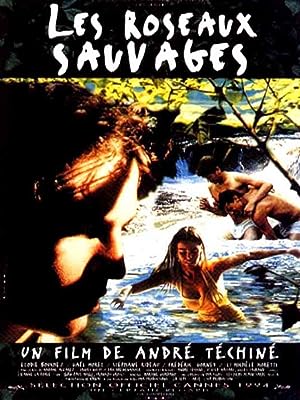 Wild Reeds (1994)
110 min|Drama|10 May 1995
7.5Rating: 7.5 / 10 from 4,704 users
In a village in the Southwest of France, 1962. Maite and Francois are 18 years old. They are friends, not lovers. In Francois's classroom, there are Serge, whose brother has just married to…
Director: André Téchiné
Creator: Olivier Massart, Gilles Taurand, André Téchiné
Actors: Élodie Bouchez, Gaël Morel, Stéphane Rideau, Frédéric Gorny