The story of a young boy in the Midwest is told simultaneously with a tale about a young girl in New York from fifty years ago as they both seek the same mysterious connection.

Carol was one of the best films I saw in 2015, as a matter of fact its probably the best film of that year. Everything about that film was so right. I really like Todd Haynes. Safe is also a fantastic film. I did like Far From Heaven and I’m Not There, though I’m not as crazy about those two. I saw the trailer for Wonderstruck and thought it looked interesting and could possibly be an experience like Carol or Safe. Wonderstruck is definitely a good film but its one of Todd Haynes’ weaker efforts. That’s really no knock on the film or the filmmaker, its just that Haynes’ has set his own bar high.

The film portrays events in the lives of two children, one in the late 1927, the other in 1977. Both kids are deaf and have common elements in their life. Rose (1927) is running away from her dad to New York to find her idol, an actress in New York. Ben (1977) is recently orphaned and runs away to New York on a quest to find his estranged father. Both stories are intertwined and interwoven despite the already visible similarities from each tale. Its an interesting concept and Haynes utilizes unique filming styles to convey the tale, however the film doesn’t always have high points and is a bit predictable.

The 1927 portion of the film emulates silent films of the era and is a tribute to movies of the time. The film is score heavy in this decade which makes the picture seem authentic. The score for this film is rather excellent and could be up for award contention at year’s end. The 1977 portion has that gritty and colored frame that perfectly represents the cinematography of films of that era. I applaud Haynes for his presentation in style. The child actors do quite well. I actually didn’t even realize Michelle Williams was in the film. Its a warm and fuzzy film that lacks any real conflict which I think was needed to perfect the film. Its a very saccharine effort which will appease younger viewers and Haynes definitely intended for it to be that way.

I have to go back to the score because its really riveting. Adds to the magic and wonder of the film and the experiences of the two leads. I love seeing New York in film throughout different decades so visually this film offers a definite viewing experience. Wonderstruck is not Haynes’ best effort but like most of his other films its an ambitious effort and technically outstanding. 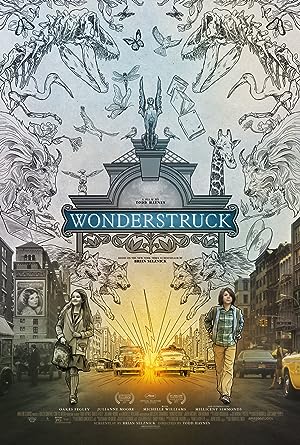 Wonderstruck (2017)
116 min|Drama, Mystery|20 Oct 2017
6.2Rating: 6.2 / 10 from 8,077 users
Tells the tale of two children separated by fifty years. In 1927, Rose searches for the actress whose life she chronicles in her scrapbook; in 1977, Ben runs away from home to find his father.
Director: Todd Haynes
Creator: Brian Selznick (screenplay by), Brian Selznick (based on the book by)
Actors: Millicent Simmonds, Julianne Moore, Cory Michael Smith, James Urbaniak

Be the first to review “Wonderstruck 2017” Cancel reply