You and I 2014 with English Subtitles

Summer in Berlin. Jonas is planning a trip through the little known area of the Uckermark in preparation for a photography project. He invites his best friend, Phillip, to come along. They haven’t met since the time they spent together in London. So they pack up their Mercedes camper and take off across uncharted territory, stopping whenever they see something they like, taking pictures and generally enjoying a laid-back road trip. The fact that Phillip is gay has never been an issue for either of them. When they pick up a hitchhiker named Boris, however, who shows Jonas some interesting spots and starts to make moves on Phillip, the friendship of the two starts to fray. Maybe three’s a crowd after all? By the end of the summer, things between Jonas and Phillip won’t ever be the same again.

The synopsis of this short indie film is that Jonas, who is German and straight, has invited his British and gay mate Philip for a camping trip. This is ostensibly so Jonas can carry out a photography project. They head off in an old VW camper and Phil sort of finds any excuse to get his kit off.

Then they run into Boris who is a friend of Jonas’ and he tags along. At first the chemistry of all three is thrown out by the new arrival but then Phil and Boris start to get along a bit too well and all bets are off.

Now as I said this is a fairly short film at 79 minutes and a lot of that time not very much happens, but that may be the point. It could be seen as a slow build up I suppose but it does not translate very well. There is some chemistry but it takes a while to rear its head. And despite a lot of nude bits being shown there is no real bedroom action either. In German and English too with good sub titles; this is a film for those who like their stories to be fairly simple and take their time getting there. I am still in two minds as to whether I really liked it so am giving the benefit of the doubt. However, this is one of those films I would not want to watch twice – so maybe try a rental option. 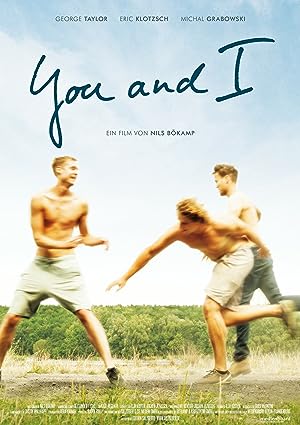 You & I (2014)
79 min|Drama, Romance|17 Sep 2015
5.8Rating: 5.8 / 10 from 618 users
Summer in Berlin. Jonas is planning a trip through the little known area of the Uckermark in preparation for a photography project. He invites his best friend, Phillip, to come along. They …
Director: Nils Bökamp
Creator: Nils Bökamp
Actors: George Taylor, Eric Klotzsch, Michal Grabowski