Parallel stories of Eros set in 200 B.C. Nomadic shepherds, plagued by drought, happen on a fishing encampment with plentiful fresh water. The local men are away but will return when it rains; the shepherds stay to refresh their flock until the rain comes. A shepherd lad and a local girl, both on the verge of puberty, start a mating dance. Also, one of the shepherds approaches a beautiful local woman, inviting her to sleep with him. How will she respond? She’s married, her husband at sea for the week. Is love forever or temporary? A subtext dramatizes the capture of fish, birds, foxes, and other animals: their fates seem arbitrary.

Not many people may have seen this film. It’s probably almost impossible to get hold of these days. A great pity. I saw it twice in the seventies. Ever since the first viewing it has been in my personal top five. It’s a story told in images, full of wonderful symbolism, beautifully photographed in black and white. It plays in a long ago Greece, in a village by the sea. The men are out fishing, the women are waiting for their return, and from the mountains a group of shepherds come down with their flocks. Thus the land meets the see, earth and water, male and female, birds and stones, a stork and a fish, birds captured in fishing nets etc. etc. This archetypical encounter is played out by the young (who remembers the intriguing poster of the prepubescent girl with the fishing net draped over her shoulder?) and the mature. I remember, when the film ended, I did not want it to end. I was feeling melancholic and a little sad that you could not be there as well. This film is like a dream you would wish you could dream every night. 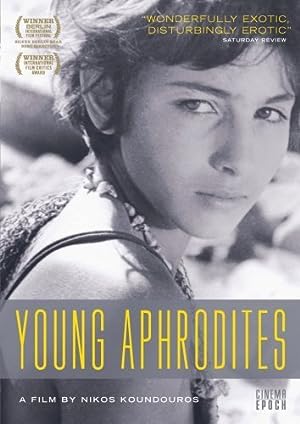