This was a pleasant surprise. As a sort of prequel to the film Young Thugs: Innocent Blood, which was a memorable but disjointed tale of teenage waste and wanton self-destruction, I wasn’t sure what to expect. But what Takashi Miike delivered was a rather sweet elegy to youth, though still packaged as a “crime movie” on the cover. It’s really not that at all, but more like Miike’s Radio Days, or a form of Stand by Me (though Radio Days came more to mind, especially as it deals more with sometimes-funny sometimes-not family dysfunction). It follows two of the characters from the first film, Riichi (mostly Richii as I could tell) and Isami, as they meet as adolescents and become friends, collaborating on a model of the Apollo 11 pod.

What I loved about the film was that Miike doesn’t shy away from showing how a kid IS affected by what he sees around him, whether it’s something small like watching/listening to a softly spoken conversation with his teacher on the phone with her husband (who doesn’t treat her very well as we see, and Riichi is sure to give him a piece of his mind, no violence though), or something more blatant like the decay of the marriage between his mousy but loving mother and his powder-keg of a father who flies off at the handle at the drop of a hat (but is he really a mean guy or just crazy? I’d say more the latter). In this environment Riichi absorbs so much, understands some of it, and he doesn’t really know he’s growing up but he is in smaller ways.

Strong acting, heartfelt writing, a dynamic sense of time and place, and even a bit of political satire thrown in – somehow, someway, and good- for-him, Riichi’s father gets caught up in some disturbances in the streets, facing off like the glorious madman he is against the police and their fire-hoses as shown in TV footage – it’s one of the director’s best straightforward comedy/dramas, and shows what he could do outside of straight genre work. And a little Ennio Morricone music goes a long way as well. 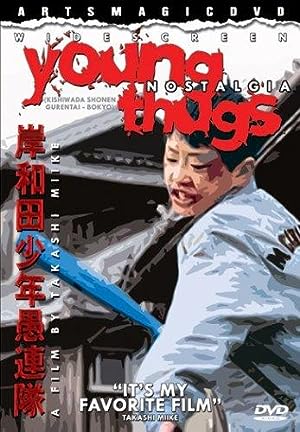 Be the first to review “Young Thugs: Nostalgia 1988 with English Subtitles” Cancel reply