Denmark, 1961. Bjørn, a middle-class boy in his early teens, wants to be accepted by Steen, a bullying peer of his with wealthy but freezingly cold parents. Bjørn’s other good friend is Mulle, a cheerful and more childish working-class boy. All three seem friends at first, but gradually Steen starts pushing Mulle away while pulling the impressionable Bjørn with him towards more and more tragic violent behavior, fueled by frustration over his loveless home life.

A great film about adolescence. I wish more people could see this film, because it is a true masterpiece. It isn’t just a pleasant movie about growing up. It contains some truly powerful and painful scenes. Not with blood and violence, but with small and subtle means Bille August portrays the clash between good and evil when boys grow up to be men. The sequel, Tro, håb og kærlighed or Twist and shout is also a good movie, but it is somewhat superfluous because Zappa contains everything that a film about young people should contain. Quite a lot of danish films are very good when it comes to portraying the good and bad of growing up. Most of Bille Augusts early films are good, but other directors have made great films like Tree of Knowledge (1981), Dance of the Polar Bears (1990), Den Store badedag (1991) or for the younger kids Guldregn (1988). In my opinion though, Zappa is by far the strongest movie of them all. 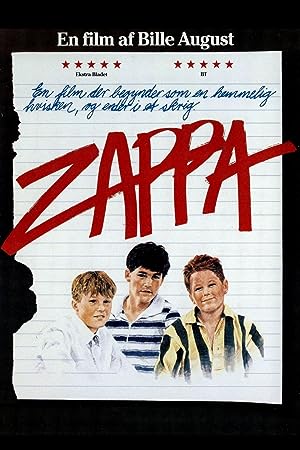 2 reviews for Zappa 1983 with English Subtitles