Beirut, 1982: a young Palestinian refugee helps an Israeli fighter pilot escape from PLO captivity because he wants to visit his ancestral family home. En route through war-torn Lebanon their relationship develops into a close bond.

This story takes place in 1982, and is about the young boy, Fahed (Abdallah El Akal), whose family has suffered a lot because of the war in Beirut. One day, an Israeli fighter pilot, Yoni (Stephen Dorff), is captured by the local forces, and Fahed sees and opportunity to free the pilot, so he can take him back to his former home, where his father wanted to plant the family’s olive-tree, but never had the chance to do so, because of the war.

At first, the two are mortal enemies, only working together because they need each other to reach their individual goals: Fahed wants to return back to his old family home, and Yoni wants to escape from prison, where he is bound to be tortured and interrogated, before he is used politically to exchange prisoners from the Israelis.

But along the way, the two form a tight friendship, where they both save each others lives on numerous occasions, until they (hopefully) reach their goals. It just goes to show, that even during the worst situations, friendships can arise when you are able to look past ones differences, and instead focus on common interests and dreams. 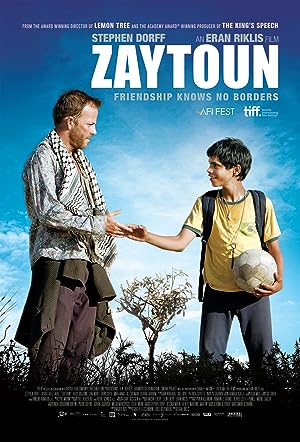 Be the first to review “Zaytoun 2012” Cancel reply