In this provocative teen comedy, Luke, a young man insecure about his masculinity discovers he’s a Zerophiliac, with the ability to change sex at will. Join Luke as he journeys into the extraordinary world of Zerophilia where so many crazy questions arise, only one question matters: “Whom do you love?”

I loved this movie. You should definitely see this whether you’re a male or female. It conquers both gender barriers.

The beginning as well as the end is intelligent. The storyline is precise with the meaning of the word that we all wonder about. However, the word isn’t correctly used. Rather, there should be a noun defining the exact meaning should be, instead of an adjective. All in all, I believe this movie had great acting. And when I mean great acting, I think of the A & B list of actors (which has a lot to say!) I read a previous comment summarizing “I wish this film can circulate through the public, it deserves the best!” I completely agree with this idea. This film should have been in the mainstream. Why wasn’t it? 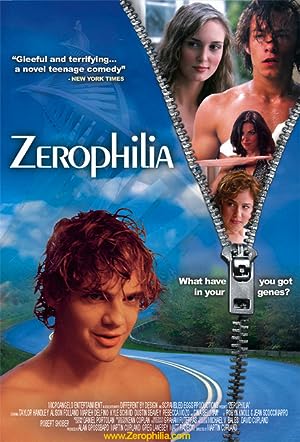 Be the first to review “Zerophilia 2005” Cancel reply