In a world rapidly being torn asunder by violence, racism and suspicion, there is a growing despondence and a feeling that almost all of humanity is at cross purposes, and most of it at war. There is a dire need for reassurance that not all is lost, that the fundamental goodness of humanity is still intact. There need to be more love stories than revenge dramas, more stories of real life heroes than superhero sagas. There need to be more stories that reinforce our faith in each other rather than a mythical messiah who might never arrive to save us. A Billion Colour Story is one such story.

How a white Englishman ended up at the 3rd annual Dallas Fort Worth South Asian Film Festival is a tale of its own, but as I settled in to my seat at the Perot Museum, Dallas TX to watch Billion Colour Story, I was not properly prepared for the emotional journey ahead. Black & white and subtitled films usually disappoint my simple tastes, but this was a very human tale with highly believable characters, and a solid plot you can relate to.

The pacing is good, the acting superb and the music and score were well balanced. If I had a criticism it was that the dubbing, subtitling and audio soundstage was at times not very polished – but this is an indie film on a tight budget, so lets not be too harsh. In any case, it did not really distract from the otherwise excellent film.

The beautiful Hindu mother Parv, and her optimistic Muslim husband Imran are both film makers, and they have a dream project which, if they are to complete, they must sell their family home to raise the finance. The film follows their story, and that of their 11 year old son Hari as they experience a variety of racial prejudices and narrow minded bullying along their journey to make their film.

I found myself drawing parallels that many post Brexit Brits and Trumps American’s alike can relate to. This modern, liberal minded multicultural family have to face the realisation that the tolerant world they knew is changing, and those backward opinions that have long been suppressed in the shadows on the edge of society have moved into the open, to the detriment of all.

We watch the character of Imran turn from the naive eternal optimist, to a man torn between his faith in humanity and the new reality to which he is exposed.

We also watch his son Hari, who despite his innocence, is wise beyond his years and appears far more attuned to the world around him than his father. As the film closes we are deeply touched by the actions of young Hari, and we see that despite the evils we have seen in the film, there is still hope for humanity in India. We are also left wondering if we, in the real world, are reverting to an intolerant society, then what must we do to stop that change. 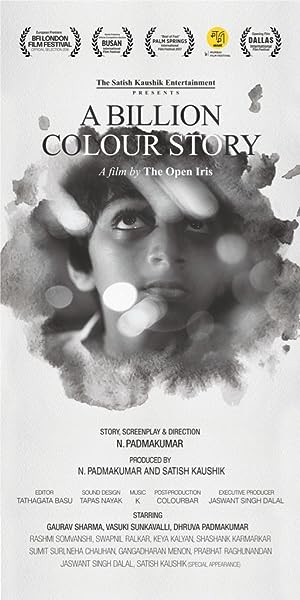 A Billion Colour Story (2016)
105 min|Drama|01 Oct 2016
7.8Rating: 7.8 / 10 from 207 users
In a world rapidly being torn asunder by violence, racism and suspicion, there is a growing despondence and a feeling that almost all of humanity is at cross purposes, and most of it at war…
Director: Padmakumar Narasimhamurthy
Creator: Padmakumar Narasimhamurthy
Actors: Dhruva Padmakumar, Gaurav Sharma, Vasuki, Rashmi Somvanshi

1 review for A Billion Colour Story 2016