Home » Movies in English » A Birder’s Guide to Everything 2013

A Birder’s Guide to Everything 2013

David Portnoy, a 15-year-old birding fanatic, thinks that he’s made the discovery of a lifetime. So, on the eve of his father’s remarriage, he escapes on an epic road trip with his best friends to solidify their place in birding history.

The movie begins with home movies of David and his mother bird watching. These home movies show up occasionally.

In New York state, David’s mother died a year ago and his father Donald is marrying her nurse Juliana. David is not happy about this.

David continues to enjoy bird watching, and he’s a talented artist as well. And of course he draws birds. His father’s interest in birds involves killing them; he runs a small chain of fast food restaurants.

David’s best friend Timmy likes Evelyn, who is beautiful but may just like Timmy because he does her math homework.

Timmy, David and Peter are members of the high school’s bird watching club. In fact, one girl has quit and the guy who joined because he wanted to be with her is kicked out. So the three guys are the only ones left. How to increase membership?

While riding his bike, David sees a duck he thought was extinct. He quickly takes a picture with inferior equipment, but the photo is not good enough to confirm what kind of bird he saw. He and the others consult Dr. Konrad, a bird expert. He gives them advice, including a prediction that the bird is migrating and will stop at a certain lake in Connecticut. David secretly plans a road trip with the guys that his father wouldn’t approve of–especially since David could be late for the wedding.

David asks Ellen for the key to the photo lab, and when Ellen discovers a special lens missing, she finds David and asks that it be returned. But when the guys explain, she agrees to let them keep it–IF she gets to go along AND take the special photo.

And so the adventure begins. The kids need a car but only Peter is a licensed driver, and he’s kind of a nerd and very nervous. Up until now he has been very confident and very logical. Timmy’s cousin Eric has a car and he doesn’t actually agree to let the boys borrow it. And are those drugs in the car? And who are those people in the van with the guns? Are they the people Eric is selling drugs for? And how did Evelyn get involved?

The adventure includes laughs, arguments, serious discussions and even some danger. The kids learn a lot about each other and about life. And, yes, we see some birds too, and we hear them. This time they are not just background sounds. David knows the birds by the sounds they make. The scenery is great too.

The big questions: Will the kids find the previously extinct bird? Will it in fact be the bird David thought it was? Will there be a romance? And will David make it to the wedding?

This is a pleasant enough story, with apparently intelligent writing about birds and about life as teenagers. Alex Wolff is the standout actor here, if you don’t count Sir Ben Kingsley. More about him later. But Timmy is a great character. And Katie Chang makes quite a contribution also. Ellen has a nice personality and is smart, but she has had trouble making friends because she moves a lot.

Kodi Smit-McPhee does a good job of being an ordinary kid, and is most effective when David has to show grief.

Ben Kingsley makes the most of what turns out to be a small role, but his first scene is not the only one. He really shows his ability later. This isn’t the type of movie you would expect him to be in, but his presence adds to the movie.

Is this is good clean family film? Not quite. There is some sex talk and some words make it to broadcast TV that younger kids shouldn’t hear, though others have multiple meanings and must therefore be all right. When I saw this, fairly often, the sound went out and a character’s mouth was blurred. One word in particular was actually used twice (though I heard a P once before the rest of the word was bleeped), once in subtitles when the guys were speaking Latin, and not to refer to a cat. But I don’t think the revelation that Donald Trump used the word in a more vulgar way had any influence on the censors. I think they did their job long before the news about the Donald.

I didn’t care for most of the music (but of course this a film for teens), but the guys do like classical music, and several scenes involving the grownups, including the wedding, had jazz that would have fit perfectly in the great Woody Allen movie set in 1940 that I saw the same weekend I saw this. 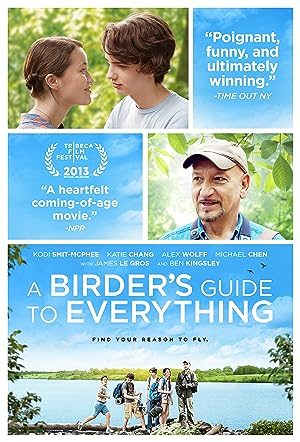 A Birder's Guide to Everything (2013)
86 min|Adventure, Comedy, Drama|21 Apr 2013
6.3Rating: 6.3 / 10 from 1,930 users
David Portnoy, a fifteen-year-old birding fanatic, thinks that he's made the discovery of a lifetime. So, on the eve of his father's remarriage, he escapes on an epic road trip with his …
Director: Rob Meyer
Creator: Rob Meyer, Luke Matheny
Actors: Kodi Smit-McPhee, James Le Gros, Daniela Lavender, Katie Chang

1 review for A Birder’s Guide to Everything 2013