“Just Jesse the Jack” puts on his Sherlock Holmes best impersonation, and enlists a group of junior detectives from a popular TV show to help him unravel the mystery behind his telepathic talents. But things get even more mysterious when they find themselves entangled in a world of haunted houses, UFOs and secret agents.

Murphy, everyone’s favorite talking doc, finds himself in an all new adventure and with a new group of kids as they investigate what might possible be aliens. Two of the children just happen to have a father who at one point was the host of an Unsolved Mysteries like show so they are willing to go up against these strange creatures.

The third film in the series has Jim Wynorski writing the screenplay but stepping away from the directorial duties. The new director on the job is Tony Randel who is best remembered for a number of horror movies like HELLBOUND: HELLRAISER II, TICKS and AMITYVILLE 1992: IT’S ABOUT TIME. If you’re familiar with those films then you might be surprised to see him directing a children’s movie like this one but he actually does a decent enough of a job with it.

Obviously this movie wasn’t made for people my age but instead for children and I think they’ll enjoy this film, although it’s not quite as entertaining as the first two. The dog himself was cute and charming enough to hold your attention and the child actors were good enough for what they were asked to do. It was nice seeing Dominique Swain in the role of a mother so this here was another added plus.

Wynorski’s screenplay has some pretty good jokes throughout it including a very funny bit with Dirty Harry’s brother. The film was obviously done on a very low-budget and this here shows throughout. I must admit that I did enjoy the UFO and alien talk and thought it was added into the adventure quite well. 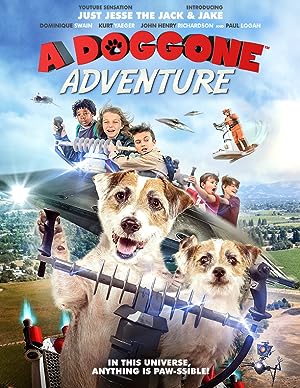 Be the first to review “A Doggone Adventure 2018” Cancel reply