Arnaud and Guillaume are in their last year of high school. Summer is approaching and like any teenager, they’re thinking about cigarettes, alcohol and sex. But boys or girls? Future looks so blurry when you’re a teenager!

Armand Lameloise recreates the most essential aspects of adolescence: confusion, excitation and teenage angst find a common ground in a story that focuses on two 16-year-old boys.

One of them is Arnaud, who seems to have little interest in girls, although he starts dating one. Perhaps because of peer pressure or maybe just to feel like he can fit in. However, he’s clearly fascinated by Guillaume, his best friend. This becomes obvious when Arnaud picks up his friend’s clothes in the dressing room and starts sniffing it. Why does he do that? Because the body of his friend is forbidden, but not the object that represents his friend in a most libidinal way.

Later on Arnaud will find his friend’s underwear and he won’t be able to resist the temptation of trying it on. As a result he will become instantly aroused. Masturbating while wearing his friend’s undergarments is as close as he thinks he can get to having intercourse with Guillaume. In this regard, masturbation sustains a fantasy. But life cannot be built upon fantasies and that’s why Arnaud wakes up crying in the middle of the night. Guillaume is, after all, the hot guy that has sex with girls very often. And Arnaud knows that… but why does he insist in preserving the dimension of angst? Because angst is a ‘horrible certainty’ that opposes to the indeterminate of life. This is related to the Lacanian real; so Arnaud has no choice but to approach the real through Lacan’s ‘object a’. Guillaume is that remainder left outside the process of constitution of the subject in the field of the other which escapes symbolization, and as such is an element heterogeneous to the signifier but nonetheless an element that belongs to the subjective structure: “this remainder, this ultimate Other, that irrational (in mathematical terms) that probe and only guaranty of the alterity of the Other is the object a”. The object a (Guillaume) depends entirely on the phantasm. That’s why it’s so hard to conceive a lasting relationship between the two boys. For too long Guillaume has lived in Arnaud’s mind only as a fantasy, and even if some things might become true, this phantasm will weigh heavily on the protagonist.

Arnaud breaks up with the girl he was dating, and accuses Guillaume of coming to him only when he’s in trouble. Subconsciously, Arnaud challenges his friend to step out of the fantasy, to resign as a phantasm and turn into a real object a, an obtainable object of desire. Whether this gambit pays off or not, is for you to see. 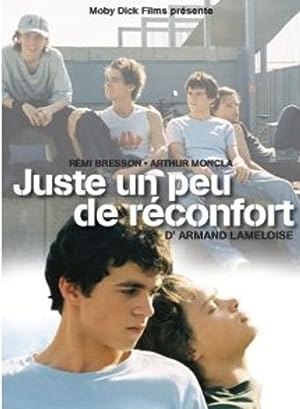 A Little Comfort (2004)
38 min|Short, Drama, Romance|12 Jul 2005
6.9Rating: 6.9 / 10 from 522 users
Arnaud and Guillaume are in their last year of high school. Summer is approaching and like any teenager, they're thinking about cigarettes, alcohol and sex. But boys or girls? Future looks so blurry when you're a teenager!
Director: Armand Lameloise
Creator: Armand Lameloise
Actors: Arthur Moncla, Rémi Bresson, Élodie Bollée, Anna Mihalcea