A kidnapped boy strikes up a friendship with his captor: an escaped convict on the run from the law, while the search is headed up by an honorable Texas Ranger.

And certainly one of the most underrated pictures on IMDB. Why? Beats me, since this is one of the best performances from Costner & Eastwood. Not to mention the others.

Maybe it’s the movie a little bit slow at start, but soon we get too see a strong character development, what leads us to the grand finale, where we cheer for the outlaw and his little “partner” (also very good performance by T.J. Lowther). The ending is undoubtedly one of the most touching in the history of cinema.

All in all, Costner did great both as director and actor and he had a winning hand picking up co-actors and screen & music writers. Plus, he made this movie in the nineties era, one of the best, if not the best for Hollywood movies.

That’s for it’s just pure classic. Just like the Texas landscape where it was taken. 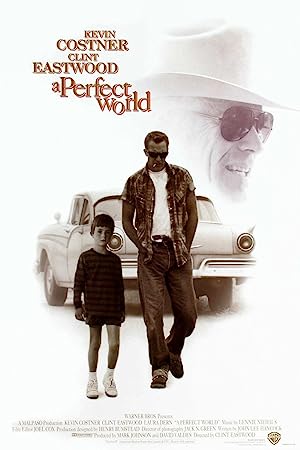 A Perfect World (1993)
138 min|Crime, Drama, Thriller|24 Nov 1993
7.5Rating: 7.5 / 10 from 67,695 users
A kidnapped boy strikes up a friendship with his captor: an escaped convict on the run from the law, while the search is headed up by an honorable Texas Ranger.
Director: Clint Eastwood
Creator: John Lee Hancock
Actors: Kevin Costner, Clint Eastwood, Laura Dern, T.J. Lowther

Be the first to review “A Perfect World 1993” Cancel reply