Bloomington, Minnesota, 1967: Jewish physics lecturer Larry Gopnik is a serious and a very put-upon man. His daughter is stealing from him to save up for a nose job, his pot-head son, who gets stoned at his own bar-mitzvah, only wants him round to fix the TV aerial and his useless brother Arthur is an unwelcome house guest. But both Arthur and Larry get turfed out into a motel when Larry’s wife Judy, who wants a divorce, moves her lover, Sy, into the house and even after Sy’s death in a car crash they are still there. With lawyers’ bills mounting for his divorce, Arthur’s criminal court appearances and a land feud with a neighbour Larry is tempted to take the bribe offered by a student to give him an illegal exam pass mark. And the rabbis he visits for advice only dole out platitudes. Still God moves in mysterious – and not always pleasant – ways, as Larry and his family will find out.

My wife and I saw the film last Friday. We talked about it for an hour over dinner and again in the evening. The more we discussed it the better we liked it.

It helps to be familiar with the paradox of Schrodinger’s cat, a staple of quantum physics, which can be found on Wikipedia, before you go see this film. You might also want to understand the quantum concept of duality.

The entire movie examines Gopnick and his world==and to a lesser extent that of his teenage son–in light of these aspects of quantum mechanics. I could not find a single scene that did not address uncertainty and/or duality. The attempt to discern traditional religious meaning in this world is humorous in itself. The opening presents the paradox and is crucial to the rest of the film.

Unlike the local review for the film which described this as a “typical Coen Brothers film” and “weird” and “no closure at the end”, I found this film to be quite literal and true to the principles of uncertainty and duality. The two major characters both find closure, and in retrospect, there is clearly a beginning, middle and end to the story the brothers wanted to tell.

But the movie continues after the closure, just as life continues on a daily basis, setting up another expectation of continual uncertainty.

Not being Jewish, I no doubt missed some of the double entendre and humor in the tradition. I would have liked to understand the Hebrew passage of the bar mitzvah ceremony, for example, and how it relates to the core theme of the film. But the movie is universal in its appeal, if you understand the basic concept of quantum mechanics upon which the film is based.

I rate this as one of their best films due to its intellectual foundation. Much more important to me than No Country. 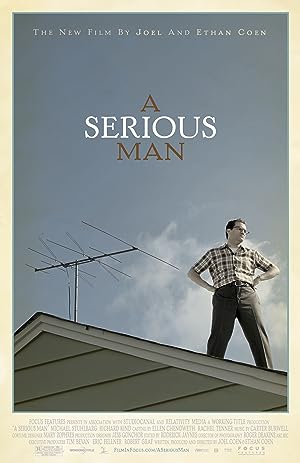 Be the first to review “A Serious Man 2009” Cancel reply