Having joined a recently created video club, a lowly prep-school sophomore – desensitized from reality by frequently viewed Internet imagery – accidentally captures on video the final moments of admired twin senior classmates dying from poisoned drugs. Rather than galvanize the school or this lad’s life in any profound or meaningful way, the tragedy causes barely a ripple in the already emotionally diminished and out-of-touch lives of everyone around.

I can certainly see why some people wouldn’t like this movie; the pacing is slow to the point that people raised on “Cloverfield” (which I happened to enjoy) and the like will probably be slitting their wrists. But, having attended a school like the one in the movie, I can tell you that the level of realism is startlingly accurate; each character could easily be someone who I knew in high school.

If you enjoy restrained directing and acting, this is an absolute must see. It is one of the few movies that almost makes you forget there is a camera involved; it is like your own private lens into the world. I rarely give a movie a perfect score, but this one earned it. 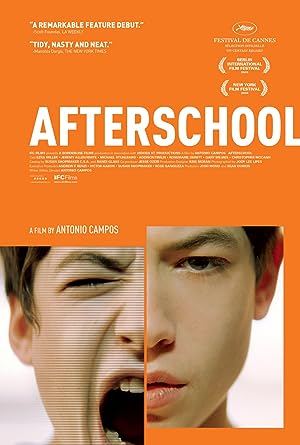 Be the first to review “Afterschool 2008” Cancel reply