On the 3rd of October a twenty-four-year-old student from Vienna kills his lover and chops up her corpse. Her torso is found in a dumpster, other body parts and the head are missing. There is no clue about the motive of the murder. A silent chronology of the events.

On the 3rd of October a twenty-four-year-old student from Vienna kills his lover and chops up her corpse. Her torso is found in a dumpster, other body parts and the head are missing. There is no clue about the motive of the murder.

The plot summary above is provided by the director himself. While this is accurate (the events do happen in the film), it is also something of a lie by omission. Those events take up really about 5% of the plot. The vast majority focuses on two young men in Vienna, who never meet, and both have their own problems in life.

On its face, the film is rather bland, and if anyone is going in expecting a genre film or a murder mystery or anything like that, they will be sorely disappointed. Its strength comes in presenting two stories that seemingly have nothing in common, and leaving it up to the audience to find a connection. Some critics have seen links between the two men, though the links are rather forced.

Others say there is a subtle commentary on class. One of the men is apparently well-off, or at least not struggling, and is well-educated, studying law abroad. (He says he is studying “the philosophy of law”.) The other man seems more working class, rough around the edges, always smoking and coming up with offensive rap songs about how much he dislikes women. But this second man can afford to work out at the gym and pursue an interest in mixed martial arts, so his perceived lower class may not be accurate. (His father is also a government employee, so the family as a whole is probably doing fine.)

The film even touches on two disparate approaches to sexuality. The young man who seems to be more well-off and proper is actually only interested in women when he can be a little sadistic to them – some light choking, duct tape. Nothing too awful, but what happens when the mundane gets boring for him? The other man, who has an intense dislike for his ex-girlfriend, may actually be harboring a hidden homosexuality. When a male friend makes an overt pass at him, he freaks out but not without hinting his interest. If these feelings are suppressed, one can imagine the frustration turning violent.

As stated above, anyone looking for a genre film or a murder mystery or a thriller is going to be let down. But if you’re interested in a character study and like deep conversations reflecting on a film and the motivations of the characters in the film, this is the sort of think-piece that has merit. “Agonie” debuted July 29, 2016 at the Fantasia Film Festival. 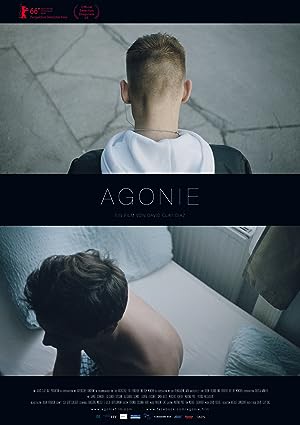