Agostino is a 13-year-old boy on vacation in Venice with his widowed mother. When a local stud seduces her, jealous Agostino joins a local group of juvenile delinquents out of protest. They force him to face his budding sexuality.

How does her impressionable young son pass his time while Mummy is absent? Now we come to the secret of WHY this film is so totally obscure. (Even fans of Thulin, or of director Mauro Bolognini, barely seem to know it exists.) Wandering the desolate beaches of the Lido, the son falls in with a vagabond group of pubescent boys, ruled over by a mysterious older man whose attachment to them is…well, let’s just say that implications are everything, and Bolognini’s dreamily homoerotic photography of underage flesh would never pass scrutiny in our more knowing times.

For anybody who does not find its sexual subtext too off-putting, Agostino is an intelligent and handsomely photographed film. Its black-and-white views of Venice are as breathtaking as the later Technicolor visions of Visconti and Nicolas Roeg. If I can’t recommend it wholeheartedly, that’s because Bolognini (unlike, say, Louis Malle in the far superior Pretty Baby) does not seem entirely aware of the dilemmas raised by his own film.

At what age does human sexuality begin? At what age is it ethically acceptable for an artist to portray it? Such questions are rife in Agostino. The answers are nowhere to be found. 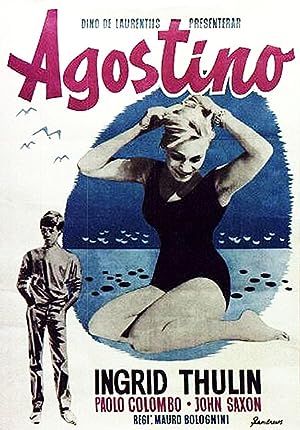 6 reviews for Agostino 1962 with English Subtitles