It’s the summer of ’75 in Sines, Portugal. Al Berto, the writer, embodies an entire moving generation. He and his friends exude youth, eccentricity and hope for the future – but right after the fall of Portugal’s dictatorship system, the country is not yet ready for his love story.

This biopic from filmmaker VICENTE ALVES DO Ó is a fictionalized and highly dramatic account of a traumatic period in the life of the gay Portuguese Poet ALBERTO RAPOSO PIDWELL TAVARES who was universally known simply as Al Berto.

It’s set in the mid-1970’s when a very young Al Berto (RICARDO TEIXEIRA) has just returned home to Portugal after a recent sojourn in Brussels studying painting. The country is in political turmoil after the recent revolution and he decides to squat in a large derelict mansion that had been dispossessed from his wealthy family in order to focus on his writing.

His return to Sines, a small rural town, is welcomed with open arms by others of his own age who want to rebel against the authoritarian regime now in power. He becomes the de facto leader of a small bohemian community whose like-minded attitude to non-conformity, and all manner of art plus sexuality, start to create a peaceful haven to live their alternative lifestyles. This, however, does not sit well with most of the reactionary locals who resent not just the brazenness of the confident Al Berto’s openly gay lifestyle, but also the fact that their own quality of life had diminished greatly as a result of all the political troubles.

The main center of the story is the passionate and steamy romance that Al Berto has with João Maria (JOSÉ PIMENTÃO ) a handsome local singer. It seems that everyone, especially the girls, have their own crush on Al Berto, but surprisingly he is not the one that strays and brings the torrid love affair with João to a crashing end.

The film, however, has a much broader canvas and looks at the whole consequences of them all being outsiders in a society struggling to come to terms with a new younger generation refusing to accept their outdated and intolerant norms. This particular decade was especially troubling for Portugal with all of its unrest and was hardly the right time for the establishment to accept the liberation and permissiveness that Al Berto and his group wanted to take for granted.

Aside from being a wonderful history lesson, it is a completely enthralling movie simply because of the central performance of Teixeira as Al Berto. Looking like a young BEN WISHAW, this charismatic and talented actor exudes the perfect amount of confidence and sensuality that would make anyone want to fall in love with him. His scenes of intimacy with Pimentão bristle with electricity as the two possess such compelling chemistry together.

Al Berto is a far from normal coming of age story but it is one that will resound with anyone who can remember back to a time when it took such guts to be so openly gay. 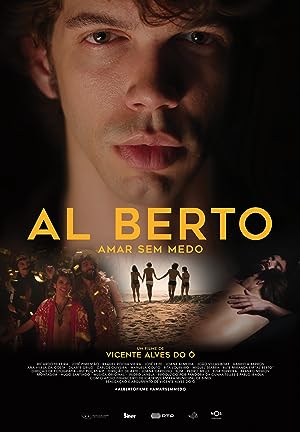