After a summer prank goes awry, a teenage boy falls in love while grappling with his guilty conscience.

If there’s one thing that’s guaranteed in life, it’s change—whether it’s the change of the seasons, the changes of growing older, or changes in the people who share our lives. It seems that whenever we get comfortable with our life, it’s time for another change. And in the teen drama All Summers End, a teenage boy is forced to face a summer full of changes.

All Summers End (also known as Grass Stains) follows 16-year-old Conrad (Tye Sheridan) through the summer that changed his life forever. What started out to be a wild and crazy summer with his two best friends turns into something very different when he meets Grace Turner (Kaitlyn Dever). As the young couple spends more time together, Conrad feels pressure from his friends to let loose. But when a stupid teenage prank turns tragic, Conrad is forced to live with his guilt and fear as he tries to make it up to Grace’s family while keeping a horrible secret.

The secrets and cover-ups and childish attempts at atonement make this coming of age drama more than just the story of first love. Everything is tinged by guilt, by grief, by pain and loss—and that takes away the carefree tone of most teen romances.

The drama here is awkward—though understandably so. Conrad and his friends make some stupid decisions—decisions that have some serious consequences—and they make even more stupid decisions in an attempt to deal with the resulting flood of uncomfortable feelings. They’re kids faced with a serious situation, and they react in the only ways that they really know how: by lying or running away or lashing out or using their fists to communicate.

Meanwhile, the teen romance between Conrad and Grace shows a different side of the story. The two find comfort in each other—no matter how tenuous their connection may actually be. It’s sad and sweet—because, of course, you’ll know that it’s just a matter of time before their comfortable relationship will be completely shaken.

Of course, the situation definitely adds tension and suspense to the story, but the pacing is still deliberate, the characters a little bland. And that makes for a dramatic but ultimately forgettable teen drama.

All Summers End isn’t just a tale of teenage summer love; it’s a somewhat sleepy story about choices and consequences and change. Young audiences may appreciate the drama and romance, but it’s too dreary and distant to be a truly moving film. 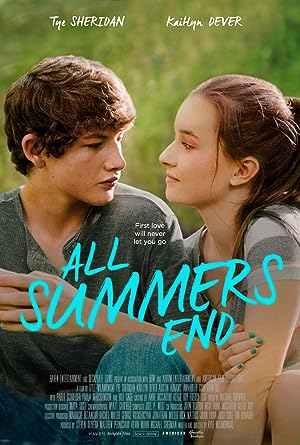