Man remembers 48 crucial hours in his life when, as a teenager, he visited his mother, the favorite woman of an important politician, in a bordello owned by her, right before some important political changes in Brazil, in 1937. In those hours, he discovers his own sexuality.

Hollywood produces hundreds of action/cartoon/fantasy films each year. Look closely and you’ll see they all mimic each other. Redundency is key in Hollywood. However if you seek a thinking film, which reaches into your every day life, look to Foreign Films. Here is one called ” Amor Estranho Amor. ” Roughly translated it means, ‘Love, Strange Love. ‘ It’s the story of a man, Hugo (adult – Walter Forster) who’s returning to the family home he lived in when he was a very young Brazilian preteen boy growing up amid the governmental turmoil of the 1930’s. Having been evicted by his Grandmother, he is taken to live in his mother’s house, a glamorous, socially exclusive, high class Bordello. While there, Hugo as a child (Marcelo Ribeiro) recalls the two days he spent with his prostitute mother and a bevy of beautiful whores. While a group of political radicals plan the over throw of the government, Hugo is treated to the eye-popping candy delights of his youthful imagination, while his mother warns him of those same pleasures. The movie is stylish, often opulent with respects to the lavish settings, the gorgeous women and most startling with the innocent beauty of the boy and his mother. However, the stagnant dialog and poor acting of the principals leaves much to be desired. Although there is much controversy over the inter-action between the young boy and the lascivious courtesans, there is nothing in the movie to be feared by any save those who lack sophistication. As for those mature enough to accept this masterful art piece for what it is, the writer/director Walter Khouri, his cast Xuxa Meneghel, Tarcisio Meira and Vera Fishcher are to be praised as they have given the world a foreign Classic. Well done. ***** 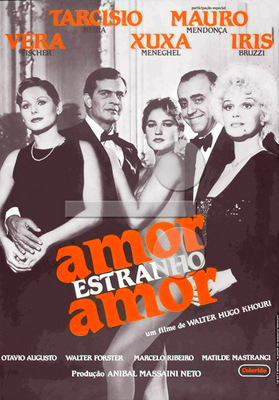 Amor Estranho Amor (1982)
97 min|Drama|11 Nov 1982
6.0Rating: 6.0 / 10 from 821 users
Man remembers 48 crucial hours in his life when, as a teenager, he visited his mother, the favorite woman of an important politician, in a bordello owned by her, right before some important…
Director: Walter Hugo Khouri
Creator: Walter Hugo Khouri
Actors: Vera Fischer, Tarcísio Meira, Xuxa, Íris Bruzzi