And Life Goes On 1992 with English Subtitles

After the earthquake of Guilan, the film director and his son, Puya, travel to the devastated area to search for the actors of the movie the director made there a few years ago, Khane-ye Doust Kodjast? (1987). In their search, they found how people who had lost everything in the earthquake still have hope and try to live life to the fullest.

Whilst watching this film i was struck by how natural and simplistic the film was. A film director and his son travel through Iran after an earthquake has struck to try and see if the boy who starred in his last film is still alive. That is what the film is, observing people on the road, whose lives have been destroyed, people whose lives still go on. Kiarostami presents life in such a naturalistic way that we are sitting in the back seat of the car taking the journey as well. That is the perfection of the this film, the real life, the carnage of life, the people striving for life, all add up to one up-lifting experience. Like Rossellini with a uplifting finale, and minus the melodrama. Kiarostami seeks to capture reality on film in a similar way as the Neo-realists, through humanity and observation, but while the Neo-realists films can be seen as natural, Kiarostami reinvents naturalism as if nature had shot the film itself. Yet another piece of perfection from Kiarostami, not to be missed. 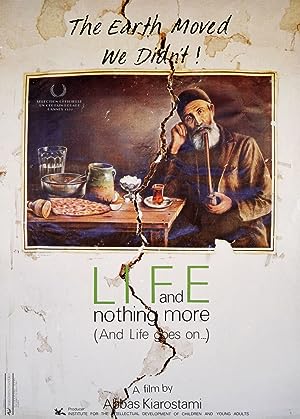 And Life Goes On (1992)
95 min|Adventure, Drama|21 Oct 1992
7.9Rating: 7.9 / 10 from 3,430 users
A director and his son return to a region damaged by the Guilan earthquake, hoping to find the children who appeared in his film a few years earlier.
Director: Abbas Kiarostami
Creator: Abbas Kiarostami
Actors: Farhad Kheradmand, Buba Bayour, Hocine Rifahi, Ferhendeh Feydi