Angus is a large, pathetic 14 year old whose thoughts are most often filled with the image of one Melissa Lefevre. Angus is shy and thinks that he has no chance of ever ‘getting’ her. Being especially uncool, he is incredibly surprised (along with the rest of the school) that he is chosen to dance with her at the Winter Ball. The only one not surprised is the cool-kid who set him up to fail, but Angus’ best friend is going to help him win the heart of Melissa by developing a new look for him.

I grew up with this movie, I enjoyed it so much. I watched it every week of my childhood. I wasn’t really one of those kids who got picked on, I just thought Angus was a true (real life) hero and I looked up to him. There isn’t too many one dimensional characters in this film. Everyone has feelings and the movie does a great job of showing their feelings. I have not read the short story, but if it’s anything like this movie it’ll be great.

Like all teen movies it has a strong message that is spelled out for everyone. Unlike other teen movies this one seem to show everyone’s side of high school life, even though the two main character’s are “outcast” they’re not really nerds. they both play on the football team and one of them is really good. You don’t really expect that from “losers”. The whole movie has great gags that everyone can enjoy and they’re really funny.

Charlie Talbert plays Angus Bethune (Great name, right?) his best friend Troy Wedberg is played by Chris Owen (Can’t Hardly Wait) and he is just hysterical throughout the whole movie. George C. Scott (Patton) plays Angus’ grandfather that is always falling asleep and he plays the role of dad to Angus giving him advice. Kathy Bates (Misery) does a great job as Angus’ mother, Kathy Bates is just a great actor. Then we have James Van Der Beek (Varsity Blues) playing the bully and he does do a great job at it and Ariana Richards (Jurassic Park) plays Melissa Lefevre which Angus has a crush on.

Overall I recommend this movie to anyone that likes teen movies such as the breakfast club, can’t hardly wait, and sixteen candles. As longs as you went to public high school this film can’t get old. 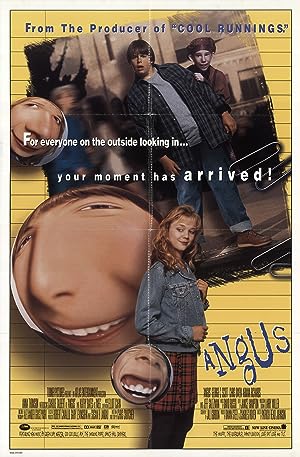 Angus (1995)
90 min|Comedy, Drama|15 Sep 1995
6.7Rating: 6.7 / 10 from 6,036 users
A miserable fat teenager secretly has a crush on the class beauty, ends up becoming the surprising participant to dance with her at a high school dance, meaning he's got to get his act together with the help of his best friend.
Director: Patrick Read Johnson
Creator: Chris Crutcher (short story), Jill Gordon (screenplay)
Actors: Perry Anzilotti, Kathy Bates, Robert Curtis Brown, Kevin Connolly