Andy, Nico, Jarod and Griff reunite in Fort Lauderdale for Spring Break and participate in a contest called “Gays Gone Wild” to determine who can attain the most “buttlove” over the course of the vacation.

I did love the first movie. It ran with the idea of making a gay version of American Pie and ran with it. The character’s became realistic and though it lost me at times it’s charm held me till the end.

The second however, was an abomination. The script needed many many more edits before it made it into production. The fact that all of the actors had to be replaced was one of many problems. Their replacements were not completely thought out. Andy’s in particular, seemed nothing like his character in the first.

However the premise still had some promise. Taking them all for spring break sounded very hilarious and had plenty of room for laughs and promiscuity. And we were instantly introduced to “Jaspers” our three antagonists. And Griff and Jarrod’s budding relationship opened up the idea of sexual monogamy a real issue that many couples face today, a promise for some type of depth to the entire plot.

It seemed like all the plot lines had promise even Nico’s rather week like with a bad luck Tiki seems to be the set up for some hilarious consequences.

But then the script fails to deliver. 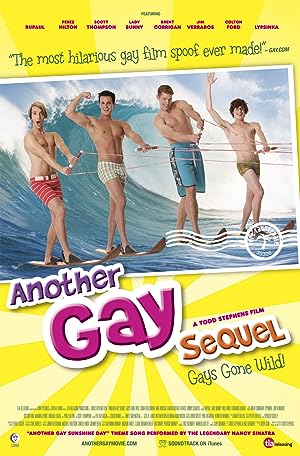 Be the first to review “Another Gay Sequel : Gays Gone Wild! 2008” Cancel reply