11-year-old Mickey House is no longer a child. But who is he? He doesn’t know. He’s friendless. He doesn’t understand his mother. He hates what’s happening to his body. Reality and imagination come together in a toxic mix. Events escalate to extremes… at home and at school. Mickey has to find the strength within him to put a stop to what’s begun. Where will his encounter with his own maturing body take him? Growing up… not for kids.

If Walt Disney, Todd Solondz, and David Lynch were to collaborate on a film, it might resemble Kuba Czekaj’s Baby Bump, a gruesome coming-of-age story that is never afraid to test the limits of cinema. Completely disregarded traditional filmmaking rules, the film finds its deranged cast interacting with its sarcastic quasi-narrator for a unique result.

It takes around ten minutes for Baby Bump to venture into immensely inappropriate territory, as a pre-teen girl offers to show a boy her “tits” in exchange for some marshmallows. The film only gets weirder and wilder from there, with Mickey House (Kacper Olszewski) trying and failing to grow up without horribly embarrassing himself. There isn’t much of a narrative. Instead, Baby Bump is comprised of a collection of somewhat intertwining scenes dealing with adolescence, body image, sexual identity, and mental health.

Dealing with taboo subjects like incest and suicide, Czekaj is a bold filmmaker who seems most comfortable in the most traditionally uncomfortable places. Chronicling Mickey’s transition into puberty, the film features disgusting sequences where public hair is used as dental floss, zits are popped onto faces, and erections are caused by something wildly inappropriate. That’s only the tip of the iceberg in regards to Baby Bump‘s vulgar nature. It’s very, very, very grim.

The film is quite humorous at times, but it’s mostly just bizarre. While there’s something darkly comedic about a young boy fearing that his penis is going to fall off, seeing the act occur over and over is nothing short of unsettling. As the film progresses, Mickey continues to fear for the safety of his manhood, which prompts him to imagine it being obliterated in increasingly gruesome ways. It reaches a peak of strangeness when the boy begins to grow unnatural body parts, and daydreams about creative ways of getting rid of them.

Baby Bump should be required viewing for anyone who appreciates weird, boundary-pushing cinema, as it’s one of the most daring and original films of the decade. In an era when sexuality seems especially topical, this film absolutely demands to be seen—just make sure you have a high tolerance for obscenity. If there’s anything in the world that triggers you, Baby Bump is sure to push the button. 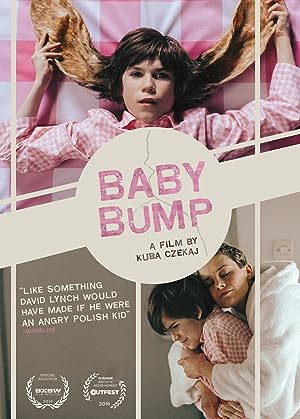