This treatise on teens behaving badly takes three separate approaches to its theme:. In the first: a hottie skater boy asks a bored, young heterosexual couple to sexually indulge him. In the second story, a boy/girl couple contends with a nerd who clings to the boy after class each day. In the final story, an attractive young guy puts the moves on his identical twin brother’s girlfriend.

Perhaps the best Pascal-Alex Vincent’s short film to date, “Bebé Requin” neatly weaves three stories of teenage relationships and the lack of communication in postmodern society. And by postmodern we could understand ‘fragmented’, that yearns for the whole. Here such fragmentation is related directly to the advent of technology. In the first story, a boy and a girl sit together semi-naked whilst the boy entertains himself with online gaming (technology). The cries of death come from the game as a mumbled cacophony that fills the room. There is not a word spoken between them, and when the door ring bells, they’re forced to get dressed. A boy has come to visit them. And while he stares taciturnly into the screen, he seems to make a decision and “breaks the ice”, so to speak.

The recently arrived boy removes his shirt, unzips his pants and walks towards the other boy, demanding to have his penis sucked. Of course, there is no reasonable reaction from either the girl or the boy. They continue to sit down, he continues to play and only ventures that the distraction is going to make him lose, even so he briefly practices fellatio on his friend, although the girl refuses to do the same. They are deeply concentrated on the screen, which is only mirroring the indifference of our time. But what does our era enjoin us to do? We must either survive through the simulacrum or succumb to the real, this foreclosure bequeaths us or sustains turning away from communication. When the girl refuses to provide pleasure to the boy, he hits them both with his skateboard. Once he’s gone, we still see the boy and the girl, faces covered in blood, sitting on the couch, and he’s still playing with the same feeling of boredom in his eyes.

The second story is a hyperbole of the lack of communication, as a teenager tries, day after day, to talk to another boy. He talks and talks and talks, and he never receives an answer; his interlocutor barely looks at him and keeps on walking. As philosopher Alan Badiou would explain, communication transmits a universe made up of disconnected images, remarks, statements and commentaries whose accepted principle is incoherence. And it’s only through the incoherent ramblings of the lonely teenager that we understand the relevance of true rapport.

In the third story, the male body is the center of the narrative. Quoting Badiou: “We will call ‘body’ the worldly dimension of the subject and ‘trace’ that which, on the basis of the event, determines the active orientation of the body. A subject is therefore a formal synthesis between the statics of the body and its dynamics, between its composition and its effectuation”. It’s only fitting, then, to observe the body duplicated, in this case, in twin brothers that carry out different dynamics. After all, one of them is gladly involved in a sexual relationship with a girl, and subsequently the other one is furiously jealous. When one of the brothers hits the other in order to supplant him during the intercourse, it’s made clear that the “active orientation of the body” can easily surmount the established boundaries.

Why is this short film a work of art? As Badiou would define it “Art is not the sublime descent of the infinite into the finite abjection of the body and sexuality. It is the production of an infinite subjective series through the finite means of a material subtraction”. Pascal-Alex Vincent successfully blends subjectivity with sexuality and provides us with an honest insight into the heart of adolescence. 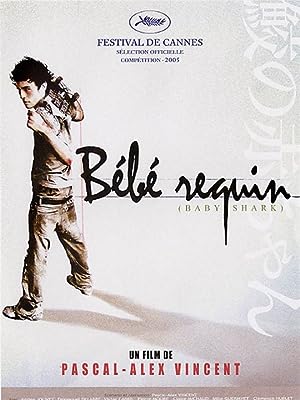 Be the first to review “Baby Shark 2005” Cancel reply