Marc and Fred went to war when they were refused a double bed at a remote Christian guest house. They won in court and now they’re back to claim their conjugal rights. Triumph turns to terror when another guest arrives, who they think might have something sinister in mind. Their weekend of fun turns into a bloody battle for survival in this smart, brutally funny and dark thriller.

I was invited by a friend to see B&B at the CineStudio in Hartford, CT. In fact this was B&B’s second US preview, followed by an outdoor celebration of the Out Film CT Organization’s 30th LGBT Anniversary Film Festival. What a great night it was…

Movie starts with a gay couple checking into a B&B. In the beginning I felt I was watching a TV movie because there was no background music. Soundtrack did come later on to add the feeling needed to this fast paced Hitchcock style thriller. There was not a single dull moment after all and crowd was either giggling or impatiently mumbling, waiting what will happen next. I enjoyed the well selected cast and sets, especially the park scenes (I am not going to tell you), filmed with a special night-vision camera, which I think could have been more erotic and extended. Of course that’s my personal idea.

This is my 3rd movie review here and, I am very happy to be the first reviewer of this great movie. Don’t miss it. 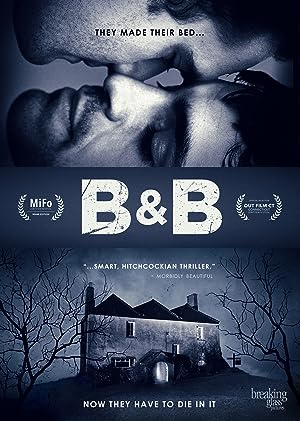