An aimless teenager on the outer edges of Brooklyn struggles to escape his bleak home life and navigate questions of self-identity, as he balances his time between his delinquent friends, a potential new girlfriend, and older men he meets online.

“Beach Rats” (2017 release; 95 min.) brings the story of Frankie, a Brooklyn teenager. As the movie opens, Frankie is on the Brooklyn Boys dating website, where he, tempted but uncertain, looks at the profiles of older guys. We get to know him better as he is hanging out with his buddies on a boardwalk. While at a nearby amusement park, he gets to know a beautiful girl, Simone, and they eventually hook up. In a parallel story, we also get to know Frankie’s family: his younger sister, his worrying mom, and his ailing dad, bedridden with cancer. At this point we’re not even 15 min. into the movie, but to tell you more of the plot would spoil your viewing experience, you’ll just have to see for yourself how it all plays out.

Couple of comments: this is the second movie from writer-director Eliza Hitmann, who a few years ago brought us the equally sexually charged “It Felt Like Love”. Here, Hittman portrays the confusion and curiosity and social pressure facing a young guy who is dealing with a heavy family situation, while at the same time also trying to fine his place, or should I say himself. BEWARE: there are a number of pretty graphic scenes in the movie so if that bothers you, please do yourself a favor and check out another movie. I must admit that, as a straight guy myself, I was a bit uncomfortable at times with some of the scenes in this movie. That said, this is a great “little” move that shows a slice of life that feels very real. There are some outstanding performance, none more so that Harris Dickinson as the vulnerable/curious Frankie, and Madeline Weinstein as Simone. Surely we have not seen the last of them. When Frankie and Simone first meet on the boardwalk, they watch the fireworks, which Frankie terms boring and not romantic at all. Responds Simone: “What is your idea of romance?”, and that goes to the core of the movie, as Hittman navigates the themes of sexuality, love, longing and belonging.

“Beach Rats” premiered at this year’s Sundance Film Festival to immediate critical acclaim. The movie finally opened this weekend at my local art-house theater here in Cincinnati. The Friday early evening screening where I saw this at was attended okay but not great (about 10 people). I can’t say that surprised me, given the nature of the film. Yet with positive word-of-mouth this movie surely will get, maybe the movie will find a larger audience, if not in the theater, then later on VOD or DVD/Blu-ray. 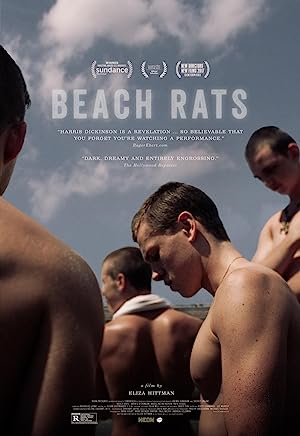 Be the first to review “Beach Rats 2017” Cancel reply