A tender love story set during a hot summer on a South-East London housing estate. Jamie, a relatively unpopular lad who bunks off school to avoid football, lives next door to Ste, a more popular athletic lad but who is frequently beaten up by his father and older brother. Such an episode of violence brings Jamie and Ste together: Sandra (Jamie’s mum) offers refugee to Ste, who has to ‘top-and-tail’ with Jamie. Hence, the story tells of their growing attraction for one another, from initial lingering glances to their irrefutable love, which so magnificently illustrated at the end of the film. In deals with the tribulations of coming to terms with their sexuality and of others finding out, in light of Sandra’s unwavering loyalty and defence of Jamie and the fear of repercussion should Ste’s family find out. The plot is set against sub-texts of Sandra’s desire to manage her own pub, and thus escape the estate, and of her new relationship with her hippy boyfriend Tony; and of Leah, the brassy girl next door who has been expelled from school and spends her time listening to Mama Cass records and tripping on a variety of drugs.

BEAUTIFUL THING is a unique drama – presenting an adolescent gay couple as complex individuals, within a greater setting (an English housing project) that also captures a bit of a slice-of-life feel. I like the working-class setting, and wasn’t bothered by the accents – as an American it required me to pay attention – a good thing as there are many subtle details that make this a very rich drama.

It does tug at the heartstrings a bit, and it lays on the cuteness a bit more than it should, but I loved the characters anyway, and the setting and context (very nicely detailed film-making) keeps those minor gripes minor.

There have been so many cynical or clichéd gay dramas released during the last decade or two, especially in the US (gay film from elsewhere in the world often seems so much more fresh and lifelike) – in many ways this film was (and remains) a real breath of fresh air. 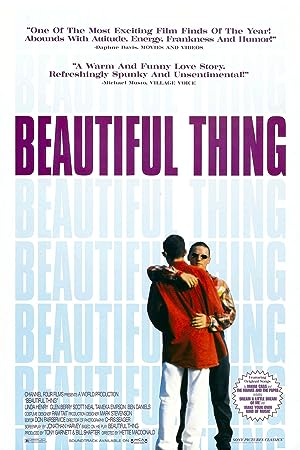 Be the first to review “Beautiful Thing 1996” Cancel reply