Episodic look at the life of Cuban poet and novelist, Reinaldo Arenas (1943-1990), from his childhood in Oriente province to his death in New York City. He joins Castro’s rebels. By 1964, he is in Havana. He meets the wealthy Pepe, an early lover; a love-hate relationship lasts for years. Openly gay behavior is a way to spite the government. His writing and homosexuality get him into trouble: he spends two years in prison, writing letters for other inmates and smuggling out a novel. He befriends Lázaro Gomes Garriles, with whom he lives stateless and in poverty in Manhattan after leaving Cuba in the Mariel boat-lift. When asked why he writes, he replies cheerfully, “Revenge.”

Evocative and moving story based on the life of Cuban writer Reinaldo Arenas. The film has excellent acting from Javier Bardem (and smaller but equally excellent performances from Johnny Depp and Sean Penn), wonderful scenery and, most of all, powerful and moving snippets from the work of a novelist whose poetic powers can inspire and lift above the poverty of life or bring emotional poignancy to the depths. This is set in a country where, under Castro’s rule, there is no “upper class” – and yet where brutal intolerance can be shown to any ‘misfits’. Arenas happens to be homosexual, which is unacceptable, and his poetry extols natural beauty (which is, it seems, seen as counter-revolutionary). The writer survives torture and imprisonment but his works survive and the success of his novels prove an inspiration to him as he survives in abject conditions. The film is a bit slow to start, and occasionally meandering, but overall it provides a powerful piece of cinema. 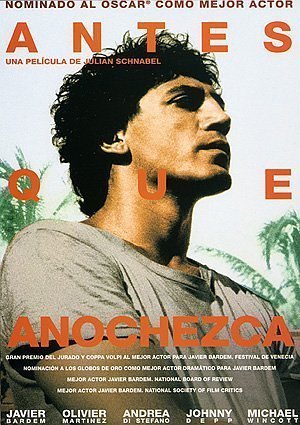 Be the first to review “Before Night Falls 2000” Cancel reply