The horrific account of 6 year old Martin Bristol, abducted from his backyard swing and forced to witness the brutal crimes of a deranged madman.

Did ANY of you prior reviewers realize this movie doesn’t need an explanation because it IS an explanation? This movie is a prequel for the movie Malevolence. And a good one. The acting wasn’t top billing actors (take a look at the budget), but it wasn’t the worst I’ve seen by far. Not sure how anyone could say there’s no plot. It won’t replace my favorite horror movie, but I did enjoy it. Either watch Malevolence first, or watch it knowing what it is. I can see how confusing and open ended it would seem not knowing that, especially since, as far as I saw, IMDb didn’t bother to mention it, either.

This movie does a great job telling the background story of how Martin became the psychopath he was in Malevolence. There were still surprises along the way. It would be nice for it to be more obvious what this movie is, because it really is not a stand alone movie like some other prequels and sequels are. 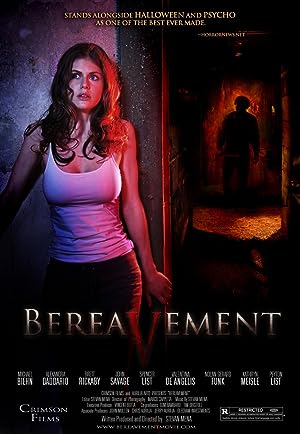 Be the first to review “Bereavement 2010” Cancel reply