When you think the suburbs, you think safety, but this holiday night the suburbs are anything but safe. Ashley (Olivia DeJonge) thought this babysitting job was going to be an easy night, but the night takes a turn when dangerous intruders break in and terrorize her and the twelve-year-old boy, Luke (Levi Miller), she’s caring for. Ashley defends her charge to the best of her ability only to discover this is no normal home invasion.

At his parents’ house a teen boy tries to seduce his blond baby sitter, while a menacing intruder circles outside in the Christmas snow …

Well made thriller – not a horror – that struggles to set the right tone. All the technical stuff is good, and the first act is engaging and well paced – although maybe a bit too flat in its attempt to lure the audience in. But the thrills kick off with a twist at just the right point, and the gore and mayhem plays out in a well written screenplay with a clear climax and resolution.

Plenty of quips and jokes, but they come off as mean spirited and I didn’t laugh once. Yet the violence is almost all done with cutaways, with no sense of exploitation, and so it seems a bit polite, as if determined to avoid a high age-classification. The biggest complaint is with the music – constantly on, with hardly a pause for nerve-jangling silence, and it really is Nancy Drew cliché all the way. I guess we have a director/producer problem.

The performances are good, especially those self-satisfied little dance moves – they reminded me of Michael Parks during his sermon in Red State.

Overall: Good structure but didn’t choose a single direction, and the music is unfknforgivable. 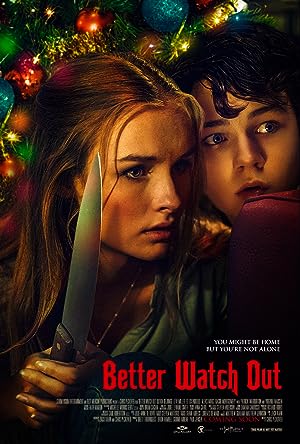 Be the first to review “Better Watch Out 2016” Cancel reply