After moving to Chicago for art school, Sam begins turning tricks to help pay the bills. His longtime, long-distance boyfriend Aaron can’t stand to be apart and finally joins him, determined to find enough work so that Sam can give up having sex for money. When the two decide to tie the knot and move to a state where they can marry, their financial worries intensify…until Aaron spies on Sam with a prominent client, and everything changes. This sweet and sexually explicit love story becomes an exhilarating extortion tale. contains graphic sexuality

Noting that this is a film that was shot in Chicago I was wondering if the folks who created Blackmail Boys had Peter LaBarbera in mind as the Christian writer who has a secret gay life that a pair of young men are about to expose?

Two gay young men get an opportunity to do just that in this film. Nathan Adloff has been doing some prostitution to help pay for school and now he’s got a for real involvement with boyfriend Taylor Reed who has come up from Tennessee to be with him.

For how it ends you have to see the film. But frankly I wouldn’t bother. The production values of this cheapie are nil and the acting is non-existent. Pity because this is an interesting subject. 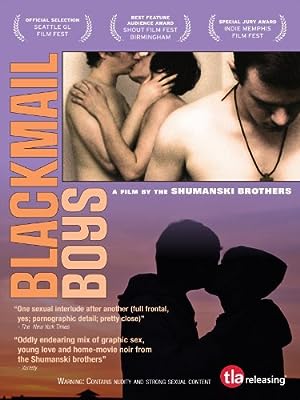