While being treated for asthma at a country spa, an American diplomat’s lonely 12-year-old son is befriended and infatuated by a suave, mysterious baron. During a story of his war experiences, the baron reveals the scar of a wound from an American soldier and thrusts a pin through it, saying “see– no feeling.” Little does the boy realize that it is his turn to be wounded. But soon his adored friend heartlessly brushes him aside and turns his seductive attentions to his mother. The boy’s jealousy and feelings of betrayal become uncontrollable.

I read this story in the original in 1939 when I was an adolescent. I understood it only from the boy’s point of view. It was a wonderful experience to see it at a time when my son was a grown man and I could understand the film from each individual’s point of view. The makers of this film are to be congratulated for their sensitivity, and their tremendous skill for presenting this story written in a different social and historical context from their own. The acting of the entire cast was subtle and powerful. The mother’s relationship with her son is beautifully realized. All in all, I highly recommend this film. I plan to buy it for my own collection. 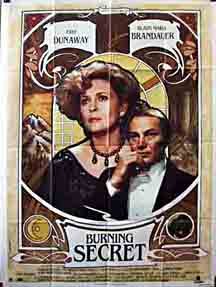 Be the first to review “Burning Secret 1988” Cancel reply