When his father sells their baby camel Altynka, his mother, Mara, escapes to be find her calf. Her disappearance is a potential disaster for the family so eldest son, Bayir, takes off to retrieve her. What follows is part road movie, part coming-of-age as Bayr adventures across the Kalmyk steppe.

Bayir is on the periphery of being a teenager. He is the eldest of three children in an agricultural family living on the Kalmyk steppe. His mother is expecting a fourth child and so his father sells the baby camel that his adult female gave birth to recently. This camel calf, Altynka, is believed by the family’s Kalmyk tradition to be a celestial camel whose arrival heralds luck with the rain needed on the steppe. Bayir is appalled that his father is selling Altynka but cannot argue with the financial needs of the family.

Altynka has been sold to a film director who requires a white camel having lost his last one to an on-set fire. Altynka’s future does not seem kind in the hands of the director.

When Bayir’s parents depart for the hospital after his mother goes into labour, he is left in charge of his younger siblings and the animals. Unfortunately Altynka’s mother, Mara, escapes. Her escape is a disaster as she is used to source and pump water for the family’s flock of sheep. Bayir leaves his younger siblings in chase of Mara, who is following Altynka’s scent across the steppe.

What follows is a road movie during which we meet various characters who share the arid steppe. We are acquainted with Kalmyk life and folklore and during the process Bayir starts to come of age.

The camels in the film are amazing and their scenes with Bayir very touching. The film is mostly very beautiful aside from contrasting dirty, industrial scenes where we see Altynka out of place and mistreated. The people that Bayir meets, the tales and folklore, the landscape and open spaces are wonderful. The film plays with the polarities of tradition versus modernity, magic/superstition versus pragmatism and relationships based on liking or need versus those purchased by money. You might guess which ones are valued within the film.

There is no doubt that life can be as harsh and arid as the steppe but one is left with a sense of happy equilibrium as people occupy their space at one with its nature and animals. This film is highly recommended for adults as well as children. 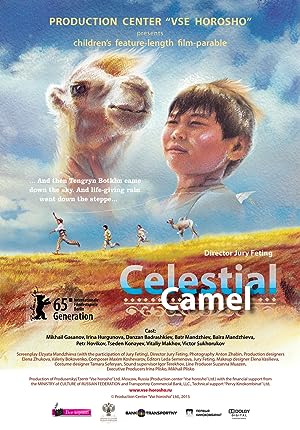