Chasing Pavement stars Remy Mars as Elijah Young, an ‘urban’ porn star who is preparing to leave the adult entertainment industry and start a new career as a chef. His new roommate, Takeshi, played by Tokio Sasaki, is a Japanese immigrant who is looking for a new start in the information technology field. Takeshi, who feels completely invisible in the United States, becomes obsessed with his extremely visible flatmate. Takeshi’s obsession culminates in a violation of boundaries that brings the two together for a moment of intimacy that neither will soon forget. The movie also stars Antonio Biaggi as Bryson Colon, a man with a troubled past who frequently hires Elijah as an escort, but wants much more.

.. the main character is old and can’t act (not at all sexy or attractive) .. Antonio Biaggi is not a serious actor, the reason he is popular is between his legs, without it he is like a singer without a voice,, now,, if you want to make a movie about “cultured” men.. maybe first you should ‘learn them proper’ you know, like the English language..

this might have been a good movie if it had real actors with sex appeal. Remy Mars’ attempt at acting like an Opera and Literature buff is just sad,,{CRINGE} don’t waste you time guys. 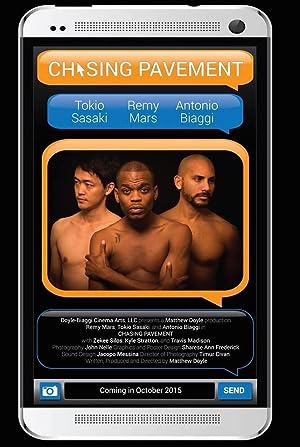 Be the first to review “Chasing Pavement 2015” Cancel reply