It’s the closing night at the last drive-in theater in America and Cecil B. Kaufman has planned the ultimate marathon of lost film prints to unleash upon his faithful cinephile patrons. Four films so rare that they have never been exhibited publicly on American soil until this very night! With titles like Wadzilla, I Was A Teenage Werebear, The Diary of Anne Frankenstein, and Zom-B-Movie, Chillerama not only celebrates the golden age of drive-in B horror shlock but also spans over four decades of cinema with something for every bad taste.

I really miss the drive in theaters. I always found those theaters really nice because not just do you get to watch movies outside and in the privacy of your own car, but sometimes these theaters got to premiere certain movies that you probably can’t find in a regular movie theater which are of course the B movies, which I’ve always loved because they always contained such a creative energy but most importantly were fun.

This is an anthology horror parodies which I really like and that’s cool since horror anthologies are a bit of a lost practice, let alone the fact we don’t really have many that are horror parodies. It’s also in a way a tribute to the beloved drive in that are now extinct.

I really like that intro which of course the one for the final film where we see the drive in manager give a monologue about the changing times and how saddened he is about the drive in closing down. It sort of reflects my feelings on not just drive ins but also the movies stores also closing down, I’m honestly not entirely sure that most of the changes made were really for the better.

The only bad thing about the film was the second tale “Teenage Werebear” which I thought was lame. But the first, third and last tale are the good ones to go for.

Wadzilla is pretty much a parody on “Godzilla” (obviously) and any other supersized foe flick back then. This flick looks like it could be the next episode of “Mystery Science Theater 3000” or even “South Park”. I really like how you can easily spot some of the bad special effects, my favorite is when you see the actors in what is obviously screened background, I know simple effect but what makes that really funny is sometimes the background they stand on is wrong and you can spot a flicker sometimes. This to me really makes the film kinda a character as if the director and production department just had no choice but to work with what they got or whatever they can get from their limited budget; well it’s better than no movie at all.

However I really like a couple of the actors in this story Ray Wise whom plays the doctor and Eric Roberts the army general, it’s just funny how both are just playing their archetypes straight and delivering some deliciously bad pieces of dialog.

The forth and final tale is solid directed by Joe Lynch. It’s basically a zombie apocalypse short but it was cool. Really liked the make up and gore effects of the zombies. Let alone the fact this attack is taking place in a drive in which is cool, I haven’t seen that happen. The young innocent couple protagonists were decent, like the girl sort of looks like actress Danalle Panabaker but isn’t. However the real highlight was seeing the Drive In manager actually kick some ass and recite a lot of familiar movie quotes which is something I might do if I was faced with this situation. It’s somewhat poetically fitting for him, just like the drive in if he’s going to go down go down with style and a bang.

However the third tale “The Diary of Anne Frankinstin” directed by Adam Green is to me the highlight of the film. This tale is just fraking hilarious from some of the obviously poor production. Seeing Kane Hodder play the monster.

However two of the highlights of this tale were seeing the guy that plays Hitler, he is just hilarious as we notice he is the only actor in the film that doesn’t speak a word of German. Everyone else does except him, I have two conclusions to this either the actor didn’t bother or have enough time to learn the language or the filmmaker couldn’t afford to hire a German actor or an actor that can speak the language. It’s just funny seeing how this guy is just practically winging it, spouting out gibberish. One moment that cracked me up was seeing him spout of the kill command to the monster and he is saying just some random words like Bobba Fett, I’m not kidding.

But the most hilarious was during the final confrontation when we see as the monster throws one of the Nazi solders to a table the film cuts to a stunt man. I won’t say any more than that you just have to see it for yourself but that to me is comic gold.

Well I’ve said enough, if your looking for another anthology or even horror comedy “Chillerama” is the film to check out. Like any movie in the drive in it’s drive in goodness. 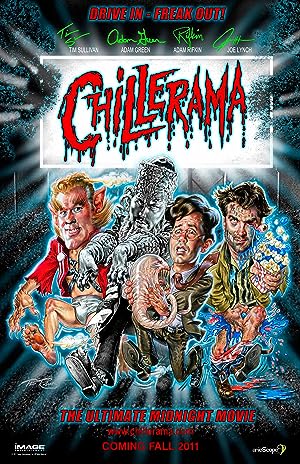 Be the first to review “Chillerama 2011” Cancel reply