Depicts the remarkable life of artist Don Bachardy and his relationship with the distinguished writer Christopher Isherwood. Includes footage shot by Chris and Don in the 1950s and interviews with Leslie Caron, John Boorman, Liza Minnelli, and others. Isherwood and Bachardy were open about their life together, regardless of the waves it caused. This was during a period when gay relationships were not acceptable. The age difference in their relationship brought obvious personal problems that had to be addressed. Don often felt disregarded by Chris’s famous friends and frequently was. Nevertheless, Bachardy pursued his art career with great energy, painting and drawing every day. Finding a vocation gave Don a sense of fulfillment and independence. He began to realize that he could function independently, which made him question whether he wanted to stay with Isherwood. Don toyed with leaving the relationship and striking out on his own, however he decided not to as he realized his love for Chris was too important. During the 1970s, Chris and Don began to collaborate on various writing projects, such as “Frankenstein: The True Story”, an unusual take on Mary Shelley’s famous novel. In 1981, Isherwood was diagnosed with prostate cancer. Bachardy nursed him throughout the course of the disease and for the last six months of Chris’ life, Don gave up painting any one else but him. What began as way to spend more time together, quickly became the project of a lifetime, a project Chris and Don did together until the very end. After Isherwood’s death, Bachardy’s career has continued to flourish. A number of books about Bachardy’s art have been published, the latest, Stars in My Eyes. Bachardy’s work resides in many permanent collections around the world, including the National Portrait Gallery in London, the Smithsonian Institute, and The Norton Simon Museum.

Presented at the Telluride Film Festival, this is one of the most touching, romantic and cinematically innovative movies I’ve seen in a long time. First of all, let’s not forget this is a documentary, with all the visual and narrative difficulties associated with the genre. Second, it’s the love story between two men. Yet, it is more emotionally involving than if it was a fictionalized version, and this is because as you watch it you are aware all that is told is absolutely true. Notwithstanding this, the movie never indulges on the aspect of homosexuality, but it looks at this as just an extraordinary story of passion between two persons bound both emotionally and artistically. Never boring, not even for one second, “Chris and Don”, produced and directed by Guido Santi and Tina Mascara, is an original way to tell a love story by mixing current footage with archive material and cartoons that results in a coherent and compelling storytelling. Reminiscent in style of “The Kid Stays in the Picture” and similar documentaries centering on real personalities, it has a beautiful musical score and benefits from a rhythmic, involving editing. 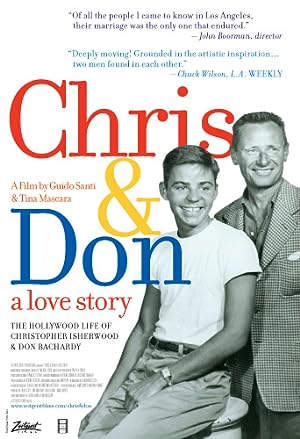