Gilles and Christine a boy and a girl live in the outskirts of Paris, their families are ineffective and distant and they lead a purposeless life. They steal some records in a supermarket but she is caught and sent to a nursing home by force by her parents. She escapes and follows Gilles to a house where some other youths live. They then decide to go south: Christine has been told there is a commune there, where artists live. So they head south sleeping rough…

I would have thought by now I couldn’t be haunted by yet another film about teen-age lovers and outsiders. Yet Assayas’ lovely and bleak “Cold Water” is a valuable entry into this crowded, but rarely truly insightful field.

It’s 1972. Touching on class, racism and other issues, the film follows Christine and Gilles, who live on the outskirts of Paris. Both are delinquents, indulging in petty crime and feeling outside society. But while Gilles has at least some care and support at home, Christine has a father whose only reaction to her confusion and pain is to lock her away in mental institutions. It’s hard to tell where Christine’s vicious cycle began. She’s clearly unbalanced, but was that inevitable? Or has the act of imprisoning her, ignoring and drugging her pain, not only failed to treat her troubles, but actually caused them?

Assayas manages to take two lost, inarticulate heroes, and make us not only care about them, but identify and see ourselves in them. You don’t have to have an adolescence nearly this extreme to understand the kind of inarticulate ache and anger of youth.

Not every moment works, and it could be argued that even at 90 minutes the film can feel too long for its very simple story. But whenever a film-maker takes an overused subject and finds something new to say about it, you have to take notice.

Frustratingly it continues to be unavailable in the U.S. on DVD, blu-ray or for legal download or online viewing. Given the film’s excellent reputation, I can only assume that has to do with the expense of rights to the film’s amazing soundtrack of 1970s music. 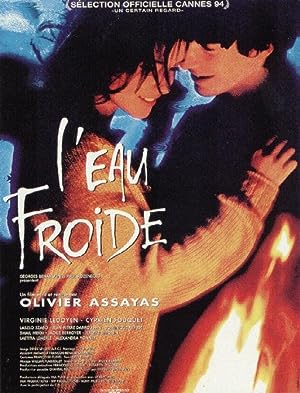 Cold Water (1994)
92 min|Drama|06 Jul 1994
7.1Rating: 7.1 / 10 from 1,111 users
When the girl of a rebelious teenage couple finds out she is being sent away, they both believe escaping the rigid order suffocating them is the only way to be free. But is it?
Director: Olivier Assayas
Creator: Olivier Assayas
Actors: Virginie Ledoyen, Cyprien Fouquet, László Szabó, Jean-Pierre Darroussin