Home » Non-English with Subtitles » Coming Out 1989 with English Subtitles

Coming Out 1989 with English Subtitles

Reportedly the first film to come out of East Germany to deal openly with gay issues. Philipp, a closeted teacher is dating a female collegue to keep up appearances. One night, by ‘accident’ he stumbles into a gay bar, meets and promptly falls in love with a young man. Transformed by this love he is no longer afraid to face up to who he is

The film tries to kindle an understanding on valuing one’s sexual orientation and identity. Many gay people experience critical times when they have to decide who to tell about their sexuality. In making this disclosure they are often fearful of negative reactions, rejection and causing upset and distress to the person they are telling. Sometimes a person may try ‘coming out’ to a supportive friend as a precursor to talking to parents or partner in order to rehearse their own part and to judge reactions. The film “Coming Out” serves as an eye-opener for those who are anxious and unsure of their own sexual identities. It has relevant issue that encourages me to recognize new perspectives based on realities in the society. It actually stimulates me to think critically. The story has a logical flow and has various twists. Although the story is not new for me (cause I’ve already read the same story from a book) the execution enables the film to stand out and appear to be revealing. I was not bored watching the whole film. I used to take a nap when I view DEFA films in my film class but I was surprised, this movie kept me awake. 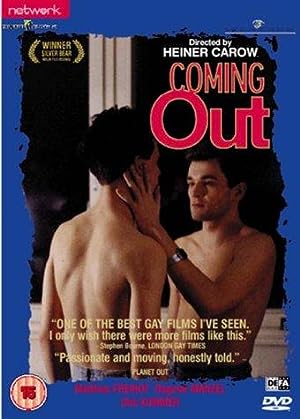